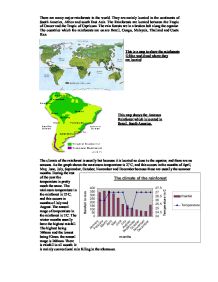 How The Management Of The Amazon Rainforest Is Being Affected

There are many major rainforests in the world. They are mainly located in the continents of South America, Africa and south East Asia. The Rainforests are located between the Tropic of Cancer and the Tropic of Capricorn. The rain forests are in a broken belt along the equator. The countries which the rainforests are on are Brazil, Congo, Malaysia, Thailand and Costa Rica. This is a map to show the rainforests Of the world and where they are located This map shows the Amazon Rainforest which is located in Brazil, South America. The climate of the rainforest is usually hot because it is located so close to the equator, and there are no seasons. As the graph shows the maximum temperature is 27 C, and this occurs in the months of April, May, June, July, September, October, November and December because these are usually the summer months. During the rest of the year the temperature is pretty much the same. The minimum temperature in the rainforest is 25 C, and this occurs in months of July and August. The annual range of temperature in the rainforest is 2 C. The winter months usually have the highest rainfall. The highest being 360mm and the lowest being 92mm. the annual range is 268mm. There is rainfall in all month. It is mainly convectional rain falling in the afternoon. The hot wet climate with no seasons causes a dense forest. This is why the rainforests structure has four main layers. The four layers are all different to one another. The top layer known as the emergent layer is the tallest layer and the trees here can reach 45m + in height. This is because they receive the most amount of light and nutrients which allows them to grow bigger than the trees on the other layers. The second layer known as the canopys also consists of tall trees but are not as tall as the trees on the emergent layer. ...read more.

If they pay less for energy they can make cheaper goods to sell. HEP stations mean more jobs will be created in industries. The country will produce more goods to sell and be able to pay back their debts and develop the country. There are many rivers in Brazil so more stations can be created. However, when the dams are built much of the land becomes flooded because of reservoirs. New Settlers. They are more interested in the land rather than the forest although they use the wood for buildings and fuel. Trees are cut down in order to create more land for poverty stricken Brazilian. It allows them to grow crops and farm the land. By giving land the locals can grow their own food. This can create profit for them if they decide to sell their crops. But, after a few years their land becomes a wasteland and this means that they would have to cut down more trees in order to relocate. This will then continue until the rainforest is completely cleared Conservation groups. They are more concerned about the forest and how animals are being endangered. They are concerned about the effect on the wildlife after the forest is being destroyed. The destruction of the forest could lead to global warming. The government of Brazil. They want to pay back the debts they owe to make a better life. They allow the rainforest to be exploited so that it can provide jobs. They just want to pay back the debts they owe to other countries so that Brazil can move forwards. Indigenous Indians. They see the forest as their home. The rainforest supplies them with food, shelter and tools. Without the forest they would be unable to survive. Wealth. Mining companies have a little interest in the forest it is the land below that is important. These are workers who work in mines. ...read more.

Other activities that could be allowed are the production of non timber forest products. There are many different fruits that can be collected in the forest and sold. The Kayapo Indians for example collect Brazil nuts, squeeze out the oil and sell it to the Body Shop who use it in their products. This supports many people by providing with a job and income. They pay taxes to the government who can use the money to develop new industries and pay for better schools and hospitals. Other industries could be set up to collect the shoots of plants. These can be pottered and sold to market gardens in countries like Holland. These are then sold as household plants in developing countries. Both of these ideas make money from the forest without harming it. The forest can also be used for eco tourism. Visitors can be limited in number and travel through the forest by canoe or take guided walks with Indian guides. This would employ small numbers of people. One problem with this idea is that, in the short term they only bring in small amounts of money unlike the mining and logging industries, and Brazil needs to make the money now in order to pay back their debts and develop the country. Many people think that Brazil can't simply cancel their debts which they owe to countries. Brazil owes many countries billions of pounds because of interest which they took out on loans. Which country in the entire world is going to cancel a debt which is worth billions of pounds?. None. Unless it is pointed out to them that if they allow the forest to be destroyed then the effects of global warming are likely to cost them more as building barriers to stop land from flooding will cost billions of pounds. This is why I believe that the rainforest should be used as a sustainable resource and should not be exploited. I believe that using the rainforest as a sustainable resource will allow it to survive for longer, and keep the human race alive. ?? ?? ?? ?? ...read more.