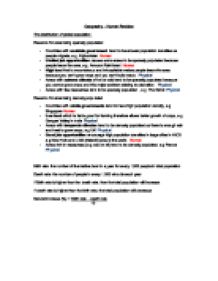 - In Poland, it is because Polish society has undergone considerable changes in recent decades. First, more and more young people, especially women, are going to college and university. - Women want to get a job and career first so they're not dependent on their husbands when they get married. - Another dramatic change came with the transition from communism to a market-based economy. Under communism unemployment officially didn't exist. Now at 18% it is the highest in the EU. This means there are concerns about getting and keeping a job. Couples are not prepared to have children if they do not have financial security. - As well as concerns about job security, there is a housing shortage and many young people live with their parents because they cannot afford a flat. The cost of raising a family is also increasing. Many couples are not prepared to economise on things like food and holidays in order to afford having children. - Another reason why women are reluctant to break their career to start a family is because they fear they won't be able to get their jobs back after taking maternity leave. ...read more.

They all have a population density of less than 10 people per square kilometre. The most densely populated areas are coastal areas and the fertile floodplains of the major rivers, like the Yangtze, found in the east of the country. Climate is another important physical factor which affects the density of population. The climate of China is very diverse, from arid to monsoonal. Large cities like Beijing and Shanghai do not get extreme climates and is one reason for their continued growth. There are no large settlements in the arid desert areas or the very wet and cold mountains. Human In China the richer areas that have more industry also have higher population densities. These areas are accessible with good communication links which has encouraged the growth of industry and population. In the 1970s the Chinese government introduced a strategy for coastal economic development. This led to rapid economic development along the south-east coastal area, which drew in workers, making it now the most densely populated region based around Shanghai. The densely populated major ports are situated on the coast where they trade with the rest of the world. They are centres of industry. The density of population in the UK ...read more.