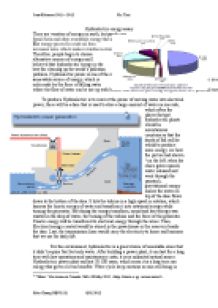 ﻿Year8 Science 2011~2012 Ms. Tsui Hydroelectric energy essay There are varieties of energy on earth, but people use fossil fuels and other renewable energy that is widely used today is harmful for the environment. The energy prices for crude oil then increases more which makes countries economy suffer more. Therefore, people begin to choose alternative sources of energy and I believed that hydroelectric energy is the best for cleaning up the world?s pollution problem. Hydroelectric power is one of the old but most useful energy on earth. Hydroelectric power is a renewable source of energy, which is only made by the force of falling water where the flow of water can be use up with benefit and used for powering the generator as a potential energy. Hydroelectric energy is economically profitable and acceptable in terms of environment impact. According to research data, the picture on the right have shown that over 7% of energy were hydroelectric conventional. To produce Hydroelectric is to convert the power of moving water into electrical power, there will be a dam that is used to store a large amount of water on one side, which often the places that got hydroelectric plants would be mountainous countries so that the depth of fall will be would to produce more energy. ...read more.

Hydroelectric had been used over the world, USA, China, Canada, Brazil, Russia etc. According to ?Use and Capacity of Global Hydropower Increase?[2] post in Washington, D.C on January 17,2012,it was written ?Hydropower use reached a record 3,427 terawatt-hours, or about 16.1 percent of global electricity consumption, by the end of 2010, continuing the rapid rate of increase experienced between 2003 and 2009.? It states that the use of hydroelectric energy had been increasing in different country and it?s likely to continue to grow in the future. However, hydroelectric have a couples of disadvantages. It requires a large area near the lake or river that affected the animal?s environment and aquatic ecosystems. Dams are building to stop the water from one side gong to another side. At the same time, it stops the animals? to migrate and disturb their mating seasons. Fishes and other and creatures might get stuck in the turbine and cause to death. This will affect the ecological balance. Not only animals, but also building a hydroelectric dam will need to relocate the citizens there to make their way. In North America, the dam had causes decrease of the salmon population. ...read more.

Today, The Three Gorges Dam was a successful piece that the share prices of the company can get $1.2 billion in a day. However, the construction had displaced 23 million people in China and now people are saying that the government should rebuild the community. Although the government had let them return to the village, there was nothing left and not enough money to rebuild. But on the other side, the Three Gorges Dam did help China on the environment, social impacts, economics issue and the energy situation. Dam had helped China on controlling flood, water shortages and river transport, which the cost of the construction had been recovered and is now making money for the resettlement funds. In conclusion, Hydroelectric is the best energy for cleaning up the environment. Although it brings up serious political and some economy problem, it gives more benefits to the environment than other energy. All energy got its own advantage and disadvantage, but to choose a good kind of alternative sources of energy, hydroelectric energy would be a great type of energy that mostly only give benefits to the environment. If people don?t start using alternative energy and continues to pollute the earth, one day the energy would be used up and would come to an end. ...read more.