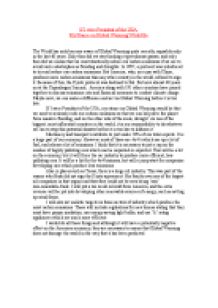 If I were President of the USA, My Stance on Global Warming Would Be...

﻿If I were President of the USA, My Stance on Global Warming Would Be The World has only become aware of Global Warming quite recently, arguably only in the last 40 years. Only then did we start looking at greenhouse gasses, and only then did we realise that we must drastically reduce our carbon emissions if we are to avoid such catastrophes as flooding and droughts. In 1997, a protocol was introduced to try and reduce our carbon emissions. But America, who, on a par with China, produces more carbon emissions than any other country in the world, refused to sign it. ...read more.

As one of the biggest, most influential countries in the world, it is our responsibility to do whatever we can to stop this potential disaster before it is too late to address it. Machinery and transport contribute to just under 50% of our total exports. It is a large part of our economy. However most of these are 4x4?s which use up a lot of fuel, and release a lot of emissions. I think that it is necessary to put a cap on the number of highly polluting cars which can be imported or exported. This will be a hit on the economy, but it will force the car industry to produce more efficient, less polluting cars. ...read more.

I will put a tax on all oil sold from America, and the extra revenue will be put into developing other renewable sources of energy, such as setting up wind farms. I will also set realistic targets on those sectors of industry which produce the most carbon emissions. These will include regulations for new homes stating that they must have proper insulation, use energy saving light bulbs, and use ?A? rating appliances which are much more efficient. I would do all these things and although it will have a potentially negative effect on the American economy, they are necessary to ensure that Global Warming does not damage the world in the way that it has been predicted. ...read more.