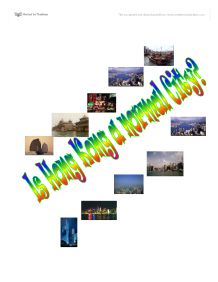 Is Hong Kong a normal city?

The aim of this fieldwork is to investigate whether Hong Kong is a normal city, however I personally think that there is no such thing as a normal city. Most normal cities have a typical type of land use. Cities will have a variety of major land uses areas which can be simplified. In normal cities we would expect to find mainly low rise housing with gardens and garages. The gardens and garages would be usually big and they would be spaced out. The houses would be spaced out. There will be lots of greenery. There would be parks and playgrounds. There would be fewer cars than the inner city and CBD where the land is more expensive. In a normal inner part of a city we would expect to find older housing such as wooden or concrete villas or apartment buildings built pre-World War II. They would be usually only have been built to a maximum of 5 floors. In a normal Central Business District we would expect to find high rise buildings possibly up to a maximum height of 58 floors. We would expect to find many shops on the ground floor and the first few floors of some buildings in the busier streets with offices occupying upper floors (Commercial land use). There will be a few residential flats or apartments in the CBD but they are usually very small with no garages or gardens. All the buildings are densely packed and built very close together to maximize the land use. ...read more.

There are some small businesses printers or herbal shops. This area is becoming more popular and it has restaurants and galleries that attract people. It is easy to get to by public transport and escalators. This means that the rent will go up for most buildings in the area and the type of buildings might begin to change in the future. Next time I go on this field trip I will: * go at different times of the day so that I get a better idea and obtain more accurate information about each place * ensure my data is correct so that I can read it properly and understand exactly the results mean * go to lots of different buildings to collect my data for building heights * collect data on many other kinds of things for example: look at what type of services are offered in each area, number of animals, children, men, woman, bikes... * go on different days of the week * Count different kinds of vehicles e.g. cars, buses, vans... * Instead of dividing by 15 to get a per hour result we should have stayed in each location for longer than a hour to see if our results changed during different times of the day. * However, overall, I think that the results I obtained were accurate for the time of the day that I was in each location and are able to give a good indication of the amount of vehicular traffic, pedestrian traffic and land use in each of these three different areas in Hong Kong. ...read more.