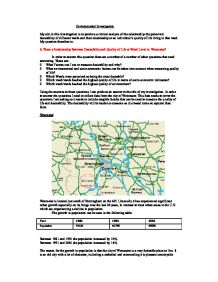 Is There a Relationship Between Desirability and Quality of Life at Ward Level in Worcester?

Environmental Investigation My aim in this investigation is to produce a critical analysis of the relationship the perceived desirability of different wards and their relationship to an individual's quality of life living in that ward. My question therefore is: Is There a Relationship Between Desirability and Quality of Life at Ward Level in Worcester? In order to answer this question there are a number of a number of other questions that need answering. These are: * What Factors can I use to measure desirability and why? * What environmental and socio-economic factors can be taken into account when measuring quality of life? * Which Wards were perceived as being the most desirable? * Which ward/wards has/had the highest quality of life in terms of socio economic indicators? * Which ward/wards has/had the highest quality of environment? Using the answers to these questions I can produce an answer to the title of my investigation. In order to answer the questions I need to collect data from the city of Worcester. This data needs to cover the questions I am asking so it needs to include tangible factors that can be used to measure the quality of life and desirability. The desirability will be harder to measure as it is based more on opinion than facts. Worcester Worcester is located just south of Birmingham on the M5. Unusually it has experienced significant urban growth especially on its fringe over the last 20 years, in contrast to must urban areas in the U.K which are experiencing a decline in population. The growth in population can be seen in the following table: Year 1981 1991 2001 Population 74121 81755 93535 Between 1981 and 1991 the population increased by 10% Between 1991 and 2001 the population increased by 14% The reason for the growth in population is that the city of Worcester is a very desirable place to live. ...read more.

Car availability is directly linked to the wealth or economic status of a household. Those with more cars must have the money to buy them, insure them, tax them etc and so most have a lot of money or be well off. These people are far more likely to be happy in life and would have a higher quality of life. Air Quality Air quality is linked to health and environmental quality. Poor air quality leads to respiratory problems and can kill off plant species. This is a good variable to measure because it has both social and environmental effects. We measured the air quality with lichenography. This is the study of lichens. Lichens are small plants which are extremely sensitive to sulphur dioxide levels in the air. Different species are more tolerant than others and using this we can look at the particular species in an area and accurately estimate the sulphur dioxide levels. This is one of these easiest methods; the only problem was that if we missed a species of lichen at one of the points it would make the results inaccurate. For example if we found xanthoria parienta in one location, which is common everywhere, but there was also lecidella elaeochroma which we didn't find it would give a very unrealistic set of results. Below is the table of lichens and the levels of SO2 they can tolerate. Data Analysis In this section I aim to analyze all my results and in doing so answer all my guiding questions and then my final question. The first two questions regarding how I am going to measure quality of life and desirability have already been answered in my methodology. Now I am going to answer the three remaining questions. Which wards were perceived as being the most desirable and why? Desirability The desirability was made up of two different factors, average house price of a 3 bedroom semi detached and the results of a questionnaire. ...read more.

The best idea would be to use a different method for measuring air quality. Noise levels The meter was analogue, human error could easily mean some of the readings are inaccurate as the noise levels changed every second. The noise levels, unlike the air quality, will vary greatly throughout a ward depending on things such as main roads, quiet suburbs and parks, schools or town centers-one reading next to the only main road in an otherwise quiet ward could quite easily give false results, especially as only 2 or 3 readings were taken in each ward. We would have to use a digital meter which could take an average result over a set time period for example 30 seconds. At least 15 or 20 reading spread evenly over the ward would have to be taken. Secondary data from the census Secondary data may not be accurate although this is highly unlikely. The data is slightly out of date, The census was in 2001, 5 years ago. There is nothing we can do about it short of undertaking a census ourselves or waiting 5 years till the next one. House Price Only 3 houses sampled and only one set of characteristics, i.e. 3 bedrooms, semi-detached. House prices are affected by more than just desirability, proximity to theme parks or airports which create noise will decrease house prices. A house near a city centre can sometimes be extremely expensive for example Kensington in London. We would have to use at least 10 different houses and at least 3 different types of house, i.e. 2 bedrooms flats, 2 bedroom terraced etc. Problems with the investigation The main problem I found with my investigation was the quality and range of data I was using. In terms of quality of life I was using social economic and environmental data. However I could also have used demographic data and intangible data. I was also concerned with the quality of the data I was using especially in the building quality survey and questionnaire data which all seemed fairly ?? ?? ?? ?? ...read more.