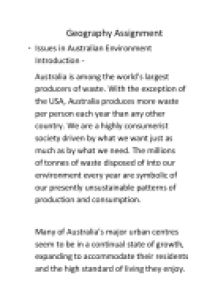 ﻿Geography Assignment 1. Issues in Australian Environment Introduction - Australia is among the world?s largest producers of waste. With the exception of the USA, Australia produces more waste per person each year than any other country. We are a highly consumerist society driven by what we want just as much as by what we need. The millions of tonnes of waste disposed of into our environment every year are symbolic of our presently unsustainable patterns of production and consumption. Many of Australia?s major urban centres seem to be in a continual state of growth, expanding to accommodate their residents and the high standard of living they enjoy. ...read more.

Even with increased public awareness of waste issues and a greater level of general recycling, Australia?s level of per capita waste grew by approximately 30 per cent between 1998 and 2002. Australia?s major waste disposal issues are outlined below. Solid Waste and limited landfills Disposing of solid waste such as household garbage and industrial by-products has traditionally involved dumping it in a landfill (commonly referred to as a tip).The use of landfills as a waste disposal method does however present a number of environment management problems. Finding new and appropriate landfill sites is becoming much more difficult and the concept of a landfill itself it not sustainable as it will not last forever. ...read more.

Australia does not boast a good track record when it comes to greenhouse gas emissions which are mainly due to the fact that coal, oil and natural gas are our three major sources of energy. All of these naturally occurring non-renewable resources are contributors to the greenhouse effect and global warming. Hazardous waste Sometimes referred to as toxic waste hazardous waste is that which requires special handling when being disposed of because of the threat it poses to humans and the environment. Nuclear waste is an example of hazardous waste. Much of the controversy surrounding the use of nuclear energy has arisen because there is still no know effective way of disposing of the radioactive waste generated. Mismanagement of this type of waste can be detrimental to living organisms. ...read more.