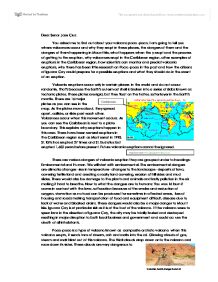 Letter about a volcanos DRAFT

Dear Senor Jose Cruz You asked me to find out about your volcano poco-poco. I am going to tell you where volcanoes occur and why they erupt in these places, the dangers of them and the dangers of them happening in Mount Isle, what happens when they erupt and the process of getting to the eruption, why volcanoes erupt in the Caribbean region, other examples of eruptions in the Caribbean region, how scientists can monitor and predict volcanic eruptions, why there has been little research on Poco-poco in the past and how the citizens of Iguana Cay could prepare for a possible eruptions and what they should do in the event of an eruption. Volcanic eruptions occur only in certain places in the world and do not occur randomly. That's because the Earth's outermost shell is broken into a series of slabs known as tectonic plates. These plates are rigid, but they float on the hotter, softer layer in the Earth's mantle. There are 16 major plates as you can see in the map. ...read more.

These dangers would also be a major danger to Mount Isle. Iguana Cay is at particular risk as it is at the foot of the volcano. If the volcano were to spew lava in the direction of Iguana Cay, the city may be totally buried and destroyed resulting in major disruption to both local business and government and could cause the death of all inhabitants. Poco-poco is a type of volcano known as composite or strato volcano when this volcano erupts, it sends tons of stream, ash and rocks into the air. Glowing clouds of gas, steam and rock blast out of this volcano. The thick clouds drop down onto the volcano and race down its sides. These clouds are very dangerous to people and anyone caught in the flow faces almost certain death. As magma bursts out of the top of the volcano, dust, gas, steam and hot rock shoot into the sky. Streams of magma called lava come to the surface and pour from the top of the volcano and down its sides. ...read more.

Citizens need to be aware of this system and have an evacuation programme they could be moved to the opposite end of the island or they could stay where they are until it is certain that volcano is going to explode. In that case they would need to be ready to leave at short notice. If the volcano were to erupt then you would need transport to get everybody away from Poco-poco. The lava would need to be diverted towards the sea using specially constructed channels by doing this the lava will cool down and water particles will evaporate creating rain which will fall on the flowing lava and cool it down. The government would need to address the following issues: 1. Employ scientists to measure volcanic activity. I would be happy to meet up with you and review Poco-poco with a view to setting up a research centre. 2. Design an emergency procedure in case of eruption to include * Evacuation, rescue programmes, medical assistance, refugee facilities and a rebuilding programme. I look forward to being able to help you in your planning Yours Sincerely Caitlyn Lister Volcanologist ...read more.

A well done essay that covers the topic well and explains the concepts of volcanos and why they erupt to a good level of detail. They also explain the impact of volcanos well, but they should also consider this ...

A well done essay that covers the topic well and explains the concepts of volcanos and why they erupt to a good level of detail. They also explain the impact of volcanos well, but they should also consider this on a global level. They need to expand on improvement measures to the volcano eruptions, and the essay structure needs improvement. They do not expand sufficiently on all the topics mentioned in the introduction so this should also be addressed.

The introduction covers everything the candidate is going to talk about, which is good, but the sentence is way too long and it is one long list which isn't right. It looks very messy. The candidate should cut this down, introduce the topic broadly and then use sub-headings to introduce smaller concepts. The candidate provides a good image of tectonic plates and explains the concept of them well. They consider the impacts of volcanos in good depth, but this is presented in a disconnected list which should be linked better so the essay flows better. They talk well about the volcano they examine, and measures that should be taken for protection. The other images do not aid the essay and should not be used. The essay ends very abruptly with no conclusion, although some solutions in some form of conclusion are assessed, but they need to be expanded upon to show greater understanding of how to deal with volcanos.

Minor grammatical errors in places. Otherwise, spelling, punctuation and grammar mainly fine. The structure of the essay needs addressing as said above.