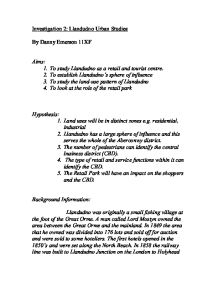 Investigation 2: Llandudno Urban Studies By Danny Emerson 11XF Aims: 1. To study Llandudno as a retail and tourist centre. 2. To establish Llandudno's sphere of influence 3. To study the land-use pattern of Llandudno 4. To look at the role of the retail park Hypothesis: 1. Land uses will be in distinct zones e.g. residential, industrial 2. Llandudno has a large sphere of influence and this serves the whole of the Aberconwy district. 3. The number of pedestrians can identify the central business district (CBD). 4. The type of retail and service functions within it can identify the CBD. 5. The Retail Park will have an impact on the shoppers and the CBD. Background Information: Llandudno was originally a small fishing village at the foot of the Great Orme. A man called Lord Mostyn owned the area between the Great Orme and the mainland. In 1849 the area that he owned was divided into 176 lots and sold off for auction and were sold to some hoteliers. The first hotels opened in the 1850's and were set along the North Beach. In 1858 the railway line was built to Llandudno Junction on the London to Holyhead main line. ...read more.

There should be 12 groups in total 2. Obtain the necessary maps and forms to complete the investigation 3. Each group must be dropped off a their corresponding starting points, as highlighted on the maps that were distributed 4. Each group will cover a different transect to get an even account of the information 5. From your starting point move forward 50 paces, stop, and then record the type of land use, using the key an forms provided 6. Continue to do this until you have reached your finishing point 7. However, on every 200 singles paces (100 double paces) you must observe and record the house types, environmental quality and the house age directly around where you are standing. Still fill in the land use. Pedestrian Count: 1. Take the map provided with points your group have to survey marked out 2. Go to each point and perform a pedestrian count, using tallies, for 5 minutes. 3. For every shop, identify the type of shop it is using the key provided. At the end you should have filled in and collected: * Land Use * House age/era * House type * Environmental evaluation Survey: 1. ...read more.

My hypothesis was correct in that Llandudno has a large sphere of influence as my survey shows; people came from other places in Wales and some others even came from Manchester and Stoke-on-Trent. This means that it certainly provides for Aberconwy district and further. The land use has also been found to be in distinct areas. This was evident right from the Background information where development stopped and started continuously. This meant that new styles and tastes would be incorporated into the developments and would be evident in different parts of Llandudno. Pedestrians showed us where the CBD would be and did so in this experiment. We found the large Retail Boulevard of Mostyn Street to be the centre of the CBD and Llandudno's local sphere of influence. Nearer the centre of the CBD we can find only public services and a very wide range of retail including clothing, finance, food, and furniture and tourist souvenirs. This showed us where it would be likely for the CBD to be, this prediction proved to be correct. The Retail Park plays a major role in Llandudno's success. This helps bring in more people to the town and so the level of tourism and customer satisfaction seems to be very high (as shown by my survey). By Danny Emerson ...read more.