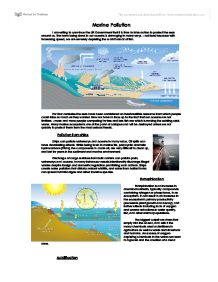 Marine Pollution I am writing to convince the UK Government that it is time to take action to protect the seas around us. The harm being done to our oceans is damaging in many ways - not least because with increasing speed, we are severely depleting the world's stock of fish. For four centuries the seas have been considered on inexhaustible resource from which people could take as much as they wanted. Now we have to face up to the fact that our oceans are not limitless - more and more people competing for less and less fish are which is making the existing crisis worse. Many marine ecosystems are at the point of collapse and will be destroyed unless we act quickly to protect them from the most serious threats. Pollution from ships Ships can pollute waterways and oceans in many ways. Oil spills can have devastating effects. ...read more.

This area is a critical zone where most local marine life lives or is born. While the paper dealt only with areas from Vancouver to northern California, other continental shelf areas may be experiencing similar effects. 'By catching' Bycatch are species caught in a fishery while it is intended to catch another species or reproductively immature juveniles of the target species. Example Cetaceans, such as dolphins, porpoises, and whales, can be seriously affected by entanglement in fishing nets and lines, or direct capture by hooks or in trawl nets. Cetacean bycatch is increasing in intensity and frequency. In some fisheries, cetaceans are captured as bycatch but then retained because of their value as food or bait. In this fashion, cetaceans can become a target of fisheries. One example of bycatch is dolphins caught in tuna nets. As dolphins are mammals and do not have gills they may drown while stuck in nets underwater. ...read more.

On a global scale we have enough fishing capacity 4 to cover at least four Earth like planets. On top of the overcapacity many fishing methods are unsustainable in their own way. These methods have a large impact on the basic functioning of our marine ecosystems. These unselective fishing practices and gear cause tremendous destruction on non target species. Bycatch / discards and bottom trawling destruction are two examples of this. Solutions Marine pollution is part of the problem of too much pollution by humans in general. There are only two ways to remedy this: either the human population is reduced, or the ecological footprint left behind by the average human is reduced. If we do not follow the second way, then the first way may be imposed upon us, as world ecosystems falter and cease to support us. The second way is for us, individually, to consume and pollute less than we do currently. For this there must be social and political will, together with a shift in awareness, so more people respect their environment and are less disposed to abuse it. ...read more.

A very well done essay which concentrates all available reasons for the polluting of the ocean and expands on them in good detail for this level. To improve the candidate could suggest other improvements, relate to each problem, such ...

A very well done essay which concentrates all available reasons for the polluting of the ocean and expands on them in good detail for this level. To improve the candidate could suggest other improvements, relate to each problem, such as with overfishing the creation of replenishable stocks of fish that can be grown in large tanks on land known as aquaculture.

The candidate includes a picture at the start which should be explained with a short notation or referred to at least once so we understand the purpose of it fully, although it does fit the topic well. The introduction is done well, and leads into the variety of ways in which we are polluting the ocean. The essay considers both environmental impacts on the wildlife, and economical impacts which is done to a very high level of detail. They consider a number of reasons for the damage to the sea, and also point out good viable solutions in a conclusion.

The tone is that of a letter and the way the candidate writes fits this well although they do not follow this up right until the end. Punctuation, grammar and spelling all done to a very high level with excellent formatting.