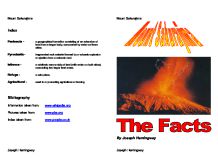 By Joseph Hemingway Location: Kyushu, Japan Height: 3,665ft Type: Stratovolcano - also called a composite volcano, is a tall, conical volcano composed of many layers of hardened lava, tephra, and volcanic ash. Last Eruption: 2007 1914 * The 1914 eruption has been the most powerful in the Japanese twentieth century. * During the eruption lava flows filled in the narrow strait between the island and the mainland, converting it into a peninsula. * Before 1914, the volcano had been dormant for over a century. ...read more.

* Lava flows are rare in Japan-the high but the lava flows at Sakurajima continued for months. * The island grew, engulfing several smaller islands nearby, and eventually becoming connected to the mainland by a narrow isthmus. Recent Activity * The volcano resumed activity in 1955, and has been erupting almost constantly ever since. * Thousands of small explosions occur each year, throwing ash to heights of up to a few kilometers above the mountain. * The Sakurajima Volcano Observatory was set up in 1960 to monitor these eruptions. ...read more.

* Sakurajima is part of the Kiroshima-Yaku National Park. * Its lava flows are a major tourist attraction. * The area around Sakurajima contains several hot spring resorts. * One of the main agricultural products of Sakurajima is a huge white radish. Index Peninsula - a geographical formation consisting of an extension of land from a larger body, surrounded by water on three sides. Pyroclastic- fragmented rock material formed by a volcanic explosion or ejection from a volcanic vent. Isthmus - a relatively narrow strip of land (with water on both sides) connecting two larger land areas. Refuge - a safe place. ...read more.

A good leaflet construction. The candidate examines a series of facts about the volcano and surrounding events to a good level, but the synthesis of resources are limited, and the candidate seems to merely copy facts from wikipedia rather ...

A good leaflet construction. The candidate examines a series of facts about the volcano and surrounding events to a good level, but the synthesis of resources are limited, and the candidate seems to merely copy facts from wikipedia rather than look around for consequences and links. The candidate does select information and present it in a concise way well.

The cover page layout is quite glaring, and the candidate should avoid the use of wordart in the title as this looks unprofessional. Minor grammatical errors in places, but overall the punctuation, grammar and spelling are to a good standard. Rather than using a solid wall of facts for the 1914 eruption I would have split it into sections to expand on certain points and make it easier to read. For example sections on consequences (economical, social etc), what happened etc.