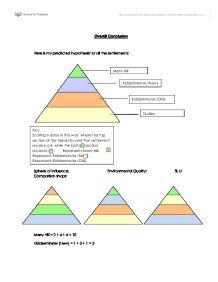 My original aim of this coursework was to investigate if three shopping centres in the West Midlands can be placed into shopping hierarchies,

Here is my predicted hypothesis for all the settlements:

Limitations to my coursework:

I think that there were many factors that could have influenced my data one of them being the amount of time we had to collect our data because I believe that we didn’t have enough time to make my data as accurate as possible. We had half a day to collect all the data in the settlements. This was not enough time to collect the data for reliable and accurate results. The averages gained could have been more accurate if there had been more data for which we needed more time. I think that another factor that influenced my data was the fact that the data collection done had not been random, meaning inaccurate results because to get the most accurate results you have to collect your data randomly. Also as we collected our data from one part of the settlement, like the car registrations, this could also have made my data unreliable. I think the environmental surveys that we had completed could be unreliable because they were based on personal opinion, thus causing them to be a bit biased, making them unreliable. Another factor that could have affected my data is the time of day I had collected the data. The data was collected at different times of the day for each settlement; this could therefore result in the reliability of the data because each settlement has a time of when it’s busiest and a time for when it’s slowest.

Improvements to my results:

There are a few ways in which I could improve the limitations of my results, such as the number of car registrations that I collected. I had collected around 25 car registrations for each settlement, however if I had collected around 50, this would have increased the reliability of my results, as more car registrations would have outlined the sphere of influence for each settlement even more, causing more reliable results.  I think that to improve my environmental surveys I could ask other people what they think about the environment and list all the factors they have to score on, this would make the environmental surveys less biased as they are not just based on my personal opinion but on what other people think of the environment in the settlement as well. I think that to improve my results further we could perhaps visit each settlement for one whole day and note down the changes that occur in the settlement throughout that day and also look at how well the environmental level are maintained throughout the day. This would also give us more time to collect the data for our results. I don’t think there is any way to make collecting the data random, however if I were to collect the data randomly, I would collect some car registrations from the car park and some from around the side streets where most shoppers park their cars. This would perhaps make my data collection more random and make my results more reliable.