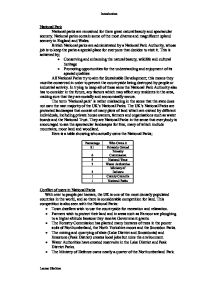 National Park National parks are renowned for there great natural beauty and spectacular scenery. National parks contain some of the most diverse and magnificent upland scenery in England and Wales. British National parks are administrated by a National Park Authority, whose job is to keep the parks a special place for everyone that decides to visit it. This is achieved by; * Conserving and enhancing the natural beauty, wildlife and cultural heritage * Promoting opportunities for the understanding and enjoyment of its special qualities All National Parks try to aim for Sustainable Development; this means they must be conserved in order to prevent the countryside being destroyed by people or industrial activity. In trying to keep all of these aims the National Park Authority also has to consider in the future, any factors which may affect any residents in the area, making sure that they are socially and economically secure. The term 'National park' is rather misleading in the sense that the state does not own the vast majority of the UK's National Parks. The UK's National Parks are protected landscapes that consist of many plots of land which are owned by different individuals, including private house owners, farmers and organisations such as water boards and the National Trust. ...read more.

The majority of the park is in Derbyshire, although it covers part of six counties. Half the population lives within 60 miles of the Peak Park. The peak District National Park was established to conserve the landscape, maintain local employment and help to educate visitors. Originally, the aims of the park never mentioned leisure, but today leisure is big. Most of the visitor's main reason for going to the peak district is because of leisure. Approximately 38000 people live in the Park. The major industries are farming, mineral extraction and tourism. Due to the parks accessibility and situation in the middle of the country, the Peak District Park is one of the most heavily-visited national Parks in the world. The Park is run by an independent local authority, which includes representatives of the county and district councils, parish councillors and other members nominated by the government. The Peak District National Park is the second most visited national park in the world (second only to Mt. Fuji in Japan) with approximately 38000 visits per year. Many parts of the Peak are very quiet and peaceful all year long but there are many places in the Park which are now bustling with visitors Castleton Castleton is 10 miles from Buxton, 16 miles from Sheffield and 27 miles from Stockport. ...read more.

Social Benefits * Jobs are created * Crime reduced due to higher levels of employment Economic Benefits * Jobs are created. Therefore people have more money to spend on local goods and services * Multiplier effect-by creating a factory and providing new jobs, the local economy grew more than the original cash injection Bradwell Bradwell village is situated in north Derbyshire and the Peak District National Park, 2 miles from hope. Bradwell is one of the few villages in the Peak District that does not seem to be totally pre-occupied with the tourist industry, perhaps because the village has a significant amount of local industry-with and engineering works in the lower part of the village and the Blue Circle cement works a short distance over to the west. Although this was not always the way, Bradwell was once an important centre for lead mining. In the Peak District of Derbyshire is a pretty, unspoiled village set in the picturesque Hope valley. The discreet charms of Bradwell are fairly well hidden from the average passer-by, for the main part of the village clings to a steep hillside above the main road; it is a rabbit warren of tiny cottages with names like Soft Water Lane, Hungry Lane and Hollowgate. From here the houses spread right up the hillside, from where there are fine views across the Hope valley. Introduction Lauren Skeldon ...read more.

This report started well - with specific examples and stats, some detailed descriptions/explanations and clearly written information on related geographical theory or concepts. However, it then loses a little coherence and structure, some parts are repetitive and some aspects lack detail eg. the multiplier effect. More clarity is needed on the overall key focus of the report, which would also give more clues as to the relevance of the final section on Bradwell.