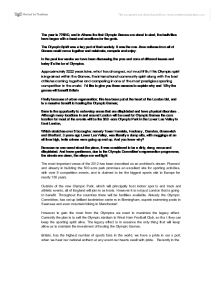 Olympics. Id like to give you three reasons to explain why and Why the games will benefit Britain Firstly because of urban regeneration; this has been put at the heart of the London bid, and is a massive benefit to hosting the Olympic Games

The year is 776BC, and in Athens the first Olympic Games are about to start, the festivities have begun with a feast and sacrifices for the gods. The Olympic Spirit was a key part of their society. It was the one-time cultures from all of Greece could come together and celebrate, compete and enjoy. In the past few weeks we have been discussing the pros and cons of different issues and today it's the tur of Olympics. Approximately 2000 years later, what has changed, not much? But this Olympic spirit is ingrained within the Games, the international community spirit along with the best athletes coming together and competing in one of the most prestigious sporting competition in the world. ...read more.

3 years ago Lower Lea Valley, was literally a dump site, with muggings at an all time high, knife crimes were going up and up. And you know why? Because no one cared about the place, it was considered to be a dirty, dangerous and dilapidated. And know gentlemen, due to the Olympic Committee's regeneration programme, the streets are clean, the alleys are well light The most important venue of the 2012 has been described as an architect's dream. Planned and already in building the 500 acre park promises an excellent site for sporting activities, with over 9 competition events, and is claimed to be the biggest sports site in Europe for nearly 150 years. Outside of the new Olympic Park, which will principally host indoor sports and track and athletic events, all of England will join in as hosts. ...read more.

The legacy effect is in essence the only thing that will keep allow us to maintain the investment of hosting the Olympic Games. Britain, has the highest number of sports fans in the world, we have a pride in our sport, when we hear our national anthem at any event our hearts swell with pride. Recently in the last Commonwealth Games over a thousand British supporters flew out to India to support Team GB. We are proud to be British, Londoner, but the 2012 Olympics is not just about London. It's about team GB, it's about national pride, it's about an amazing, historical event taking place on our doorstep, it's about getting excited and involved, and it's about making sure that we maximise the legacy and the investment. As Lord Coe said "The Games will inspire the nation and give us the ability to showcase all that is great about Britain." ...read more.