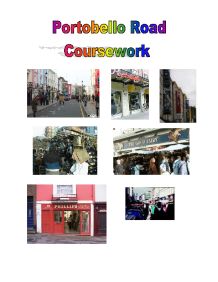 Portobello Road coursework Task:- Collect information and data to prove the hypothesis or to reject it. Hypothesis:- Portobello Road is going through a period of change. Key questions that I will be asking myself when going there are: - 1. What was Portobello Road like in the past? 2. What is it like today? 3. What changes have occurred? 4. Why has Portobello Road changed and is it still changing? 5. What do people think about these changes? I have chosen these questions as I think they are the most relevant and useful in helping me answer the task. A map of Portobello Road along with its whereabouts is shown on the next page. Introduction:- In 1739 Admiral Vernon captured the city of Puerto Bello in the Caribbean and this exploit gave rise to a number of commemorative names. One of these, Portobello Farm, in turn gave its name to Portobello Road, formerly the lane leading to it. Portobello Road is essentially a Victorian street. It grew up, bit by bit, between the big estates of Notting Hill and Paddington in London's great period of residential expansion in the second half of the nineteenth century; its shops and markets served the large houses on the estates. As the district at the northern end also developed, Portobello Road provided goods and services for the working people who lived in the surrounding terraces. By the late 1860's, at a time when much of the road had been built, a market had sprung up selling fruit and vegetables. There were also pottery kilns in the area, and Mr John Whyte's Hippodrome horse-racing course attracted some of the first traders to the area - who were gypsies dealing in horses and herbs. Portobello road is located in the North of Kensington (see figures 1 & 2) By the end of the 1800s a long running battle over the extent of the market had begun between the authorities, street-traders and shop-keepers. ...read more.

Photos Fig 22: Portobello Road (Notting Hill area) today. Fig 23: Notting Hill in the Sixties Fig 24: Portobello Road, off Lancaster Road. Fig 25: Tavistock Road Fig 26: Street market in Portobello Road Field sketch When I went to Portobello Road I drew a sketch of a typical house in the area as a part of my field sketch. The house I drew, shown on the following page (see Fig 27), was located in Lancaster Road. I have detailed some key features of the house which I noticed, such as the appearance, general layout, size etc. As can be seen from this sketch, the houses in this area are well presented and sizeable. The grand columns on the house hint that the properties in the area belong to people of a high social status. Another noticeable thing was that the area surrounding Portobello, including Lancaster Road (the location of this house), was well presented. Conclusion:- To analyse the results in a bit more detail and to help come to a conclusion I will refer to the 'key questions' in the hypothesis. What was Portobello Road like in the past? Portobello Road did not have a pleasant past. Back in the Sixties, about 40 years ago, it was dilapidated and very run-down. Immigrants were the main residents in slums; refer to Figure 23 for an example of the poor living conditions in the area at the time. In it you can see broken windows, children playing amongst rubbish, cracks in buildings, and overall a very poor quality environment in comparison to today. What is Portobello Road like today? Today Portobello Road is one of the trendiest places to live in London. Gentrification has taken place over the last 40 years. This has led to the eventual rise in house prices on the road and around the immediate area. At its best, it is a place of extraordinary vitality and a source of both enjoyment and fascination to its many users. ...read more.

the beggars; get them off the streets and help them to start a new life. These changes will ensure that the area doesn't de-gentrify and become run down. Not only will these changes will also ensure that the future of the area is more stable than it is right now, but it will also help the vitally of the area improve too. Evaluation:- I think that my work was good in that my hypothesis was proven; I managed to obtain fairly good results for the questionnaire which helped as evidence in my conclusion. I could have asked better questions so that my results would have been more accurate and worthwhile. The questions that I asked were dependent on other factors; for example the peoples' thought on whether Portobello Road had changed was dependent on the time they had lived there or on whether they had been there before. Factors such as these should have been taken into consideration. I should have also carried out a pilot survey to make sure that all the questions would work properly for all the people questioned. My hypothesis was relevant as change had taken place in such a short period of time which is abnormal for any road. If the changes had taken place over a long period of time my hypothesis would be irrelevant as change would be expected over lengthy periods of time. I think that I had sufficient data to prove the hypothesis as all the data that I had suggested that Portobello road was changing. To further extend this study I could do the field work for the whole stretch of Portobello so that I can analyse the change in the whole road and not just in the shopping district; or I could extend my investigation to another major road in the borough so that I could make comparisons between the changes that have taken place there and in Portobello during the same time period. To extend my investigation in terms of data analysis I could carry out more statistical calculations which in turn can be represented in graphical form. ...read more.