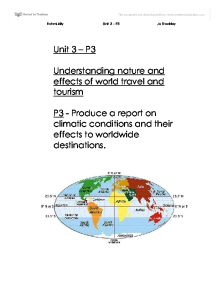 Produce a report on climatic conditions and their effects on worldwide destinations for tourism..

Unit 3 - P3 Understanding nature and effects of world travel and tourism P3 - Produce a report on climatic conditions and their effects to worldwide destinations. I have been asked to produce a report about climatic conditions and their effects to worldwide destinations. - Climatic conditions Earthquakes - Earthquakes are a shaking, trembling or concussion of the earth which makes the earth vibrate due to causes of underground volcanic movement which makes a certain rumbling noise. The wave shock can sometimes move half a hemisphere. This can destroy many towns/cities and many thousand lives. They can also be called earth din, earthquakes and earth shocks. - Droughts - Most rainfall depends on water vapour carried by winds from an ocean or other source of moisture. If these moisture-carrying winds are replaced by winds from a dry region, or if they are modified by downward motion, as in the centre of an anticyclone, the weather is abnormally dry and often persistently cloudless. Its also a period or condition of unusually dry weather within a geographic area where rainfall is normally present. ...read more.

Seasonal Variations (Scenarios) A family (2 adults and 2 kids) going for a summer holiday in Ibiza-Spain. Good time to go: For a summer holiday, the best time for them to go is in June, July and August because it's going to be hot and sunny (27 - 28 degrees). Bad time to go: December, January and February are not the best months for them to go to Spain if they're expecting a very hot and sunny summer holiday. (10 - 11 degrees) If there's too hot in Spain there is a possibility for the country to suffer a drought and the family may be affected if that happen. On the 7th of June of 2006 Spain suffered of a very bad drought, the drought was spread unevenly across the country. A group of teenagers going to Austria for skiing during for the winter holiday. Good time to go: The best time for the group to go to Austria for that occasion is in January and February because the climate is going to be cold and it's also going to be snowing (-4 - -5 degrees). ...read more.

Over 80% of tornadoes strike between noon and midnight. On average, a tornado will stay on the ground for no more than 20 minutes. Unusual and/or extreme weather conditions Extreme weather conditions include weather phenomena that are at the extremes of the historical distribution, especially severe or unseasonal weather. The most commonly used definition of extreme weather is based on an events climatology's distribution. Extreme weather occurs only 5% or less of the time. According to climate scientists and meteorological researchers, extreme weather events are rare. Extreme heat waves and extreme cold waves are both example of unusual weather conditions. Heat waves are waves within countries giving out abnormally high temperatures. Cold waves are waves within countries that give out abnormally low temperatures both given in different locations When dramatic weather catastrophes increase, it is due the number of severe events, and an increase in population densities which then increase the number of people effected and objects damaged caused by an event of given severity. Conclusion In this assignment I've learnt about different types of climatic conditions and how they can affect worldwide destinations. I've also showed the right and the wrong time to travel to specific destinations. ...read more.