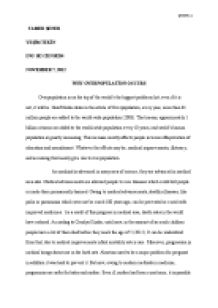 ï»¿ÅENER, TAMER ÅENER YEÅÄ°M TEKÄ°N ING 102 CRN10284 NOVEMBER 7, 2012 WHY OVERPOPULATÄ°ON OCCURS Overpopulation is on the top of the world’s the biggest problems list; even if it is not, it will be. Nasif Nahle states in the article of Overpopulation, every year, more than 81 million people are added to the world-wide population (2003). That means, approximately 1 billion citizens are added to the world-wide population every 10 years, and world’s human population is greatly increasing. This increase mostly affects people in terms ofdeprivation of education and nourishment. Whatever the effects may be, medical improvements, illiteracy, and accessing food easily give rise to overpopulation. As mankind is advanced in many area of science, they are advanced in medical area also. Medical advancements are allowed people to cure diseases which could kill people or make them permanently harmed. ...read more.

In the article of ?The Population Explosion: Causes and Consequences?, Carolyn Kinder states that, in the late 80s, a baby born in Iceland was 32 times more likely to live to the age of one year as a baby born in Afghanistan(2012). The reason of this situation is difference in nutrition. Because people learned about nutrition more, difference between countries? baby death rate reduced. Vaccinations are also a great factor for preventing sicknesses. Since 1800s, scientist advanced using vaccinations and by doing this prevented most of diseases like influenza, smallpox, and rubella. Now, such advancement is allows scientists to generate new vaccinations in order to prohibit even simple diseases like flu. Another significant cause of overpopulation is ignorance. People who are deprived from education cannot be able to understand the influences of overpopulation on earth and humankind. ...read more.

The increase of food product is more than the increase of human population. Carolyn Kinder states, ?Between 1950 and 1984, for example, the amount of grain harvested worldwide increased from 631 million ton to 1.65 billion tons; this represents a gain of 2.6 times at a time when the world population increased by only 1.9 times,? (2012). This data means that, if people have children, they can feed their children easily with additional food sources. And this abundance seems like not break up nearly. According to Carolyn Kinder?s estimation many specialists admit that there is no shortage of nourishment (2012). So, if there is no shortage in near future people do not need to concern about food. To conclude, medical advancements, illustration, and increased food accessibility are the chief reasons for over population. If governments all over the world do not take precautions for overpopulation, problems are going to get bigger than today. ...read more.