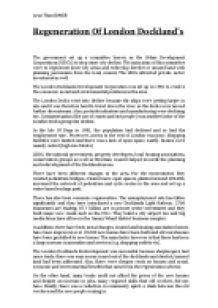 ﻿Arun Thind DMEB Regeneration Of London Dockland?s The government set up a committee known as the Urban Development Corporations (UDC?s) to stop inner city decline. The main aims of this committee were to regenerate inner city areas and redevelop derelict or unused land with planning permission from the local council. The UDCs attracted private sector investment as well. The London Docklands Development Corporation was set up in 1981 to resolve the economic, social and environmental problems in the area. The London Docks went into decline because the ships were getting larger in size and it was therefore hard to travel down the river, so the docks were moved further downstream. ...read more.

Shopping facilities were limited and there was a lack of open space. Lastly, houses were mainly rented (high rise blocks). LDDC, the national government, property developers, local housing associations, conservation groups as well as Newham council helped towards the planning and redevelopment of the Docklands areas. There have been different changes to the area. For the environment, they created pedestrian bridges, created more open spaces, planted around 200,000, increased the network of pedestrian and cycle routes in the area and set up a water based ecology park. ...read more.

The main factor however is that there has been a large increase in amenities and services (e.g. shopping outlets etc). The London Docklands Redevelopment was successful because shopkeepers had more trade, there was easy access in and out of the docklands and derelict/unused land had been addressed. Also, there were cheaper rents on houses and social, economic and environmental benefits that came from the regeneration scheme. On the other hand, many locals could not afford the prices of the new houses and despite an increase in jobs, many required skills that old workers did not have. Finally, there was a reduction in community spirit, a clash between the old workers and the new people coming in. ...read more.