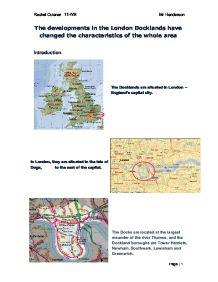 Research Question - The Developments of The London Docklands have changed the characteristics of the whole area.

The developments in the London Docklands have changed the characteristics of the whole area Introduction In the early 19th century the London Docklands was one of the busiest ports in the world. With around one quarter of the entire world's trade coming into England, it was a thriving industry, with many surrounding areas developing due to its growth, such as "ship repair, heavy engineering, food processing, warehousing and distribution". Industries continued to blossom due to the raw products imported from the docks such as tobacco and animal skins. The docks specialised in "high-value" products such as ivory, cocoa and coffee along with wine and wool, for which warehouses and wine cellars were made. Due to the successfulness of the first dock, more were opened and continued to develop quickly during the 19th century. By the 1930's the London Docklands carried 35 million tons of cargo worth around �700m, with around 100,000 Dockers and ancillary workers were dependant on the Docklands for employment. The docks were multicultural and heavily populated with immigrants, to escape from situations apparent in their countries, such as the potato famine in Ireland. Many of these people did not have the skills for higher paid jobs, and so flocked from rural England or from across seas, eager to find jobs that didn't require training or experience. In 1961 the Docklands had reached its peak as 60 million tons of cargo was handled, although only a few years later the Docklands began to decline due to a variety of factors which I will discuss here. Advanced technology such as cranes and fork lift trucks, started to lessen the necessity of manual labour needed to work on the docks. A more substantial factor for the decline of the Dockland's was that the use of large containers was a new and more efficient strategy for cargo handling. Containerisation led onto greater job losses, and so furthered the decline of the Docklands. ...read more.

I tested environmental quality using an environmental impact survey, and also I carried out a questionnaire which linked to it. It was a simple star diagram, with 5 being the highest and 1 being the lowest. For the crime rates objective I came up with an original method for collecting data. This was called the wallet method, and it involved me walking with my wallet on show in front of a group of people, and then dropping it on the ground purposefully as I walked past them. Then I recorded how many people left the wallet and didn't tell me, how many people gave back the wallet to me, and how many took the wallet. If there were many people that took the wallet in a particular area this showed a higher level of crime in that area. More people that returned the wallet suggests a friendlier community and lower crime rates. Data Presentation & Interpretation The first objective was to see how land use varied throughout the Docklands. I used my land use map for primary research methods and also took pictures for examples of types of land use in different areas. For secondary research I looked at a virtual land use map, and also the amount of housing in different areas. From this I made a graph which I super-imposed on the images to compare the different things land is used for in different areas. The coloured in land use map shows the trend of a lot more residential areas as we move further and further from Canary Wharf. This is also backed up by the chloropleth map which shows the concentration of dwellings per hectare is increased the further we move away from Canary Wharf. I took the averages of the data from each area (by using the midpoint from each data set) to compare how much of the area is used for residential purposes. ...read more.

The housing survey was little inaccurate, because the ratings were based on our own opinions, for example my idea of a house with good security could be a burglar alarm, with a mortise lock and so I would give it a good score however someone else's view of security could differ from this and so give the house a lower score. My conclusions are still valid, because I proved this from people's views on the housing in their area in my questionnaire, and also looked at house prices in the areas. My questionnaire may have been unreliable because too few were given out. This is due to not enough people wanting to participate in completing one. This especially occurred in Canary Wharf where I was greeted with "Sorry I'm running late", or "I'm busy at the moment", although I think this reflected the nature of the area. Also, I could only survey a select amount of residents and this meant that not all age ranges were included. I did not come across any 65+ residents of the Isle of Dogs to give my questionnaire out to. The traffic count worked well, although it was slightly unreliable because we had to carry out the survey at different times. This was important because it may look as if an area had good transport links in the morning rush hour compared to an area when we conducted the survey in the early afternoon when buses/trains etc don't run as regularly. My overall conclusion was valid because I looked at the amount of public transport in each of the locations, and also used quotes from my questionnaire, and interview with staff from the TFL team. If I was to carry out the project again I would visit the site for longer and on two separate occasions to make the results more reliable and accurate. Having more time would enable me to gather more information and I would also add more criteria for the environmental impact survey to give a broader base for drawing conclusion. ?? ?? ?? ?? Rachel Cutenar 11HYB Mr Henderson Page | 1 ...read more.