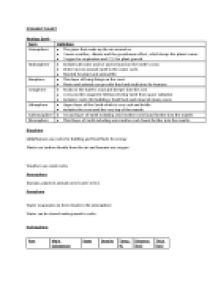 Revision notes - the Earth, causes and effects of Volcanoes and Earthquakes.

﻿DYNAMIC PLANET Restless Earth Term Definition Atmosphere 1. The gases that make up the air around us. 2. Causes weather, climate and the greenhouse effect, which keeps the planet warm. 3. Oxygen for respiration and CO2 for plant growth. Hydrosphere 1. Includes all water and ice and is found on the earth?s crust. 2. Water moves around earth in the water cycle. 3. Needed for plant and animal life. Biosphere 1. Thin layer of living things on the crust. 2. Plants and animals can provide food and medicines for humans Geosphere 1. Rocks on the Earth?s crust and deeper into the core. 2. Core provides magnetic field protecting Earth from space radiation. 3. Includes: rocks (for building), fossil fuels and minerals (many uses). Lithosphere 1. Upper layer of the Earth which is very cool and brittle 2. Includes the crust and the very top of the mantle. Asthenosphere 1. Second layer of Earth including semi-molten rock found further into the mantle. Mesosphere 1. Third layer of Earth including semi-molten rock found further into the mantle. Biosphere LinksHumans use rocks for building and fossil fuels for energy Plants use carbon dioxide from the air and humans use oxygen Weather can erode rocks Atmosphere Humans, plants & animals need water to live Geosphere Water evaporates to form clouds in the atmosphere Water can be stored underground in rocks Hydrosphere Part Main Substances State Density Temp. ...read more.

When they erupt they throw a lot of ash into the air because of their ash layers. How are Earthquakes Caused? Plates do not move smoothly so when a plate gets stuck, pressure builds up. When the pressure is released an earthquake can take place. The point where the pressure is released is known as the focus and the point directly above it on the surface of the earth is called the epicentre. Seismic Waves are the shock waves created by the earthquake and they lose energy the further they travel from the focus and epicentre. They create the greatest damage at the epicentre and sometimes they can even lead to tsunamis. Case Study: Kashmir Date: 8/10/2005 Time: 08:52 (Pakistan standard time) Location: 1. Indian controlled Kashmir 2. 19km northeast from Muzaffarabad. 3. North of Pakistan. 4. Northwest of India 5. Continent of Asia What: 1. Moment Magnitude Scale: 7.6 2. Richter Scale: 5.2 3. Death toll: 74,698 4. Landslides Why: 1. Eurasian and Indian plate boundary 2. Also caused Himalayas formation 3. Destructive plate boundary Who: 1. 73,338 (Northwest Frontier Province) 2. 1,360 (Indian Administered Kashmir) 3. 4 (Afghanistan) 4. 106,000 were injured 5. 3 million left homeless Case Study: L?Aquila Date: 6/04/2009 Time: 03.30 Location: 1. ...read more.