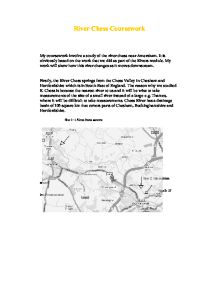 River Chess Coursework My coursework involve a study of the river chess near Amersham. It is obviously based on the work that we did as part of the Rivers module. My work will show how this river changes as it moves downstream. Firstly, the River Chess springs from the Chess Valley in Chesham and Hertfordshire which is in South-East of England. The reason why we studied R. Chess is because the nearest river to us and it will be wise to take measurements of the size of a small river instead of a large e.g. Thames, where it will be difficult to take measurements. Chess River has a drainage basin of 105 square km that covers parts of Chesham, Buckinghamshire and Hertfordshire. Site 1: 1.5 km from source Site 2: 16km from source Site 3: 17 km From source It is important to study the rivers and systems, so we know what to expect and will be able ...read more.

River discharge: Discharge is when the river reaches it maximum peak of water capacity. According to the Bradshaw Model, the river discharges in its lower course most. The reason for discharge is due to the increase of water in the river - through rain, surface run-off...etc. Occupied channel width: The occupied channel width is the distance of which the water covers from one end to the other. This varies due to the discharge of the river. This means that on dry days, the occupied channel width is short, whereas on rainy days, the measurement will read quite long. This also means that the river get widens in the lower course. Channel depth: Channel depth is the height from the water surface to the river bed. The depth increases downstream because Of the amount of water which increases due to the input From tributaries. ...read more.