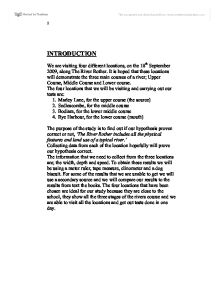 INTRODUCTION We are visiting four different locations, on the 18th September 2009, along The River Rother. It is hoped that these locations will demonstrate the three main courses of a river; Upper Course, Middle Course and Lower course. The four locations that we will be visiting and carrying out our tests are: 1. Marley Lane, for the upper course (the source) 2. Sedlescombe, for the middle course 3. Bodiam, for the lower middle course 4. Rye Harbour, for the lower course (mouth) The purpose of the study is to find out if our hypothesis proven correct or not, 'The River Rother includes all the physical features and land use of a typical river.' Collecting data from each of the location hopefully will prove our hypothesis correct. The information that we need to collect from the three locations are; the width, depth and speed. To obtain these results we will be using a meter ruler, tape measure, clinometer and a dog biscuit. For some of the results that we are unable to get we will use a secondary source and we will compare our results to the results from text the books. The four locations that have been chosen are ideal for our study because they are close to the school, they show all the three stages of the rivers course and we are able to visit all the locations and get out tests done in one day. The River Rother, is 35 miles long, is a river flowing through the South East of England and runs though East Sussex and Kent. Its source is near Rotherfield which is in East Sussex, and its mouth is Rye Harbor, which is part of the English Channel. METHODOLOGY Width At a narrow point of the rivers course (Battle and Sedlescombe), we will use a meter ruler to measure the distance from one bank to other. At mid point (Bodiam), we will use a tape measurer crossing via a bridge. ...read more.

DATA ANALYSIS/INTERPRETATION Valley Profiles The valley at Battle is quite deep at the sides and not very deep in the middle. The shape is shaped like a 'U' but this maybe be because of the bridge that goes over the top of the river. Battle has a small valley that had been enlarged by the bridge. Therefore, this affected our results slightly but the valley was meant to be 'V' shaped. Sedlescombe is a lot flatter than Battle and it is wider. But we where only able to measure one side of the valley, so our interpretation is an estimate due to privet land but it still has the typical shape of a 'U' which is what we expected to find. Bodiam has a very wide valley floor and the valley slopes where at an angle making a rough 'U' shape like a typical river at this stage. Rye, we where unable to measure because the valley floor was too large. However, this is what we expected to find because it is the last stage of the river, the mouth. The theory from the textbooks is that the valley goes from a 'V' shape valley to a 'U' shape valley. This is due to hard rock being in the upper course of the river and because the high lands are mainly rock it is harder for the river to erode the away at the banks so it's a narrow shape forming a 'V' shape but the river winds around the hard rock a pattern like a snake. As you carry on down the river the hard rock starts to get erode so what is left are interlocking spurs, these also erode over time crating a wider valley floor crating a 'U'shape. The hypothesis is proven correct for the Valley Profile. How do I add the figures? DATA ANALYSIS/INTERPRETATION River Profiles The width for the three locations is as followed from smallest to the largest; Battle 55cm, Sedlescombe 130cm and Bodiam with 1200cm. ...read more.

It wasn't a good temperature either causing the clinometers to steam up and unable to read the angles accurately enough for a good result. The rain also ruined my own paper with my results on it making me have to get other results that could be wrong. And people rushing the test because it would start to rain again made it possible that we skipped something important and get the wrong results. Our hypothesis, 'The River Rother includes all the physical features and land use of a typical river.' can be inaccurate because it isn't being very clear to what kind of river it wants us to test for, 'a typical river' is there such thing? All rivers are going to be different whether its due to what part of a country they are in or the size of the river or even how much rain the river gets. But I think the main problem that makes our hypothesis inaccurate is not noting what country this typical river is from. A river in Africa is going to be different to a river in England because of the amount of rain fall, less rain less water in the river to clear the obstructions causing the river to have a smaller volume and slower speed. The land use would be completely different too; most of Africa is a LEDC (Less Economically Developed Country) so there wouldn't be a large amount of Settlement and Industry around the mouth of the river. The weather conditions affect the comparisons too, for example; if there is a heat wave the river will lose a lot of water causing speed to slow and volume to drop, depth and width would change too. In England we usually expect rain so the rivers volume, speed, depth and width would all increase. The hypothesis should change to a more clearer, 'The River Rother includes all the physical features and land use of a typical river in England'. Or something similar that is more targeted on a specific river. ?? ?? ?? ?? 1 ...read more.