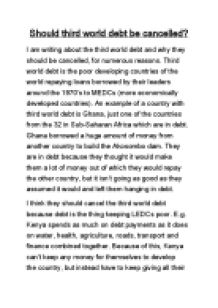 Should 3rd world debt be cancelled?

﻿Should third world debt be cancelled? I am writing about the third world debt and why they should be cancelled, for numerous reasons. Third world debt is the poor developing countries of the world repaying loans borrowed by their leaders around the 1970?s to MEDCs (more economically developed countries). An example of a country with third world debt is Ghana, just one of the countries from the 32 in Sub-Saharan Africa which are in debt. Ghana borrowed a huge amount of money from another country to build the Akosombo dam. They are in debt because they thought it would make them a lot of money out of which they would repay the other country, but it isn?t going as good as they assumed it would and left them hanging in debt. I think they should cancel the third world debt because debt is the thing keeping LEDCs poor. E.g. Kenya spends as much on debt payments as it does on water, health, agriculture, roads, transport and finance combined together. ...read more.

These countries will stay poor due to this reason and will never be free of debt at this rate. Plus MEDCs do not need the money.it is clear that the lenders are already well of and don?t necessarily need the money so therefore would be much better if the money was spent of giving the debtor countries citizens a better life rather than letting them die trying to pay off loans. I think the third world debt should be cancelled because the citizens of a country should not suffer from what the government has signed up for them. The citizens had no say in it which is unfair but instead are paying off debts which isn?t there?s. From this essay I can see there are many reasons for and against cancelling the third world debt. I feel the third world debt should be cancelled because due to corrupt leaders and government, citizens are paying off debts for them by giving their hard-earned money, through higher taxes, less money being spent on public services and living in a country with an unstable economy. BY SANA ALTAF. ...read more.