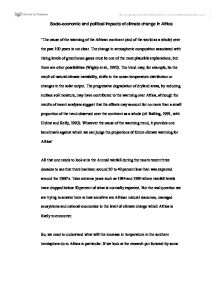 Socio-economic and political impacts of climate change in Africa

'The cause of the warming of the African continent (and of the world as a whole) over the past 100 years is not clear. The change in atmospheric composition associated with rising levels of greenhouse gases must be one of the most plausible explanations, but there are other possibilities (Wigley et al., 1992). The trend may, for example, be the result of natural climate variability, shifts in the ocean temperature distribution or changes in the solar output. The progressive degradation of dryland areas, by reducing surface soil moisture, may have contributed to the warming over Africa, although the results of recent analyses suggest that the effects may account for no more than a small proportion of the trend observed over the continent as a whole (cf. ...read more.

then across the whole continent of Africa, on average violence and conflict was around 50 percent more likely to occur in abnormally warm years. The cause of this according to PNAS - National Academy of Sciences, is that people become uneasy and increasingly worried about the food supply when they see that the crops have had a particularly bad year generally this happens in times of extreme heat. An example of this is fighting in Darfur which took place killing 200,000 people and pressured two million people into evacuating from their homes and lives to escape it. Another example is the extended study between the years of 1981 to 2002 where researchers looked for trends to show correlation between above average heat and civil conflict which may result from it. ...read more.

Africa's current contribution to global markets (both for export and for consumption) is relatively small and highly variable depending on weather conditions and pricing policies.The region possesses a marked intra- seasonal and inter-annual variability of rainfall making it a high-risk environment for agriculture. To meet future food demands of the growing population, regional crop production by 2035 will have to expand by an estimated 3% per annum. In South Africa, 89% of the land area is currently used for agriculture with about 35,000 ha of land lost annually to urban and industrial expansion and afforestation. The effects of growing demand and shrinking area of agricultural land are forcing agriculture into more marginal areas with ever greater sensitivity to climate variability. Socio-economic and political impacts of climate change in Africa Socio-economic and political impacts of climate change in Africa ...read more.

The author has used numerical data and other supporting evidence to add weight to their points and has also attempted to analyse their findings, though the structure of the essay could be improved upon. Assuming the full title of the ...

The author has used numerical data and other supporting evidence to add weight to their points and has also attempted to analyse their findings, though the structure of the essay could be improved upon. Assuming the full title of the essay is 'describe the socio-economic and political impacts of climate change in Africa', the author has offered a number of socio-economic impacts, but is perhaps lacking in the number of political impacts that have been explored.

The author successfully suggests possible reasons behind socio-economic trends or individual events in places. However, some areas remain pure description with little attempt at analysis. While an effective comment about the future has been made in the conclusion, some of the information offered is simply an extension of the essay rather than an attempt to draw together the content already discussed in the main body of the essay. The level of analysis of the essay would benefit from a more coherent structure in which each point is introduced, developed, exemplified and analysed.

The grammar of the essay could be improved in a number of places and some sentences would benefit from being restructured. The referencing of sources, if done consistently throughout, would be a strong point of this essay. The author has correctly and effectively used a number of appropriate terms throughout the essay. This essay has the potential to score very high marks, if greater attention is paid to structure and grammar and if more in-depth analysis is offered.