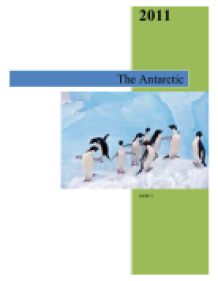 Speech on the Development of Antarctica

Introduction Ladies and gentlemen, I'm here to tell you all about Antarctica, Antarctica is the region lying south of the Antarctica circle, and surrounds the South Pole. The ocean that surrounds Antarctica is southern ocean, Indian Ocean, Pacific Ocean and Atlantic Ocean. There is a very small piece of land which points towards South America. Antarctica is very far from the equator that's why it is so cold. Antarctica contains 90% of the world's ice, and it contains 10% of the world's surface. If all of the ice in Antarctica melted, the sea level would raise 60 meters. In the summer It is almost one and a half times the Size of USA Antarctica is very cold that's why people don't go there because they might freeze to death, the temperature falls below -70 c in places. If you take off your gloves and your finger will freeze in seconds. You will get bad frostbite and they'll need to be raped up warm. At the earth's pole the same amount of the suns energy is spread over a large area, this means that Antarctica don't have much heat because, it is harder to reach the south pole as a result Antarctica will be cold because the sun can't reach it Who has control of Antarctica? ...read more.

In recent years, scientists have observed a hole in the ozone layer above Antarctica. The hole is three times layer than us and has caused huge concern about production of ozone destroyed gases. These finding suggest Antarctica is much more fragile than was previously thought The reason for development The reason that Antarctica should be developed is that there are loads of recourses to help us or tell us more about Antarctica like fishing, miners, research, tourisms and military Fishing Fishing should be developed because there are plenty of fishes in the ocean, enough for everyone. The world's population is rising, krill may be the answer to global food shortage, No one owns these waters, they belong to everyone Fishing has taken place for hundreds of years We depend upon fishing to make our livelihood, We will agree to fish quotas Miners Miners should be developed because there are huge reserves of coal, oil and precious metals. They will serve the worlds needs. As non-renewable resources run out we need to find other sources Researcher Researcher should be developed because its greatest value might be the information it can provide about our planet. ...read more.

Miners The environment has problems with the global warming it is getting colder in Antarctica and loads of icecap is starting to melt and the sea level is at risk. Researchers My Arguments against researcher, they should not be able to hurt or threaten the animals and let them suffer with an injection just to cure us for the future generation. Tourist Tourist should not go to Antarctica because we should leave the Animals and creatures in peace as they are already suffering with the researcher taking injection and miners giving problems with miners Military If you test weapon or bombs it will lead to a big danger for environment or the animals it should leave everyone in peace. Conclusion I think that Antarctica should and should not be developed because it help us and it does not help Antarctica like with miners we are running out of oil and it is helping us bringing more but it is destroying the environment. If we had a solution of stopping environment to be destroyed or the animals to get illness then I might change my mind that we should develop Antarctica. I think tourist should come and see Antarctica as it is such nice place to go there ...read more.