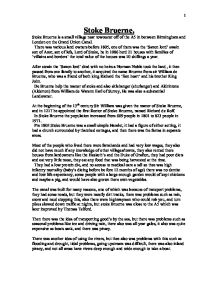 Stoke Bruerne is a small village near towcestor off of the A5 in between Birmingham and London on the Grand Union Canal.

Stoke Bruerne. Stoke Bruerne is a small village near towcestor off of the A5 in between Birmingham and London on the Grand Union Canal. There was various land owners before 1805, one of them was the 'Saxon lord' swain son of Azor, son of lefs, Lord of Stoke, he in 1086 herd 21 houses with families of 'villains and borders' the total value of the houses was 10 shillings a year. After swain the 'Saxon lord' died with no heirs a Norman Noble took the land , it then passed from one family to another, it acquired the name Bruerne from sir William de Bruerne, who was a friend of both king Richard the 'lion heart' and his brother King John. De Bruerne help the manor of stoke and also sitlehanger (shutlanger) and Aldrintone (Alderton) from William de Warenn Earl of Surrey, He was also a substantial Landowner. At the beginning of the 13th century Sir William was given the manor of Stoke Bruerne, and in 1217 he appointed the first Rector of Stoke Bruerne, named Richard de Rolf. In Stoke Bruerne the population increased from 609 people in 1801 to 823 people in 1971. Pre 1805 Stoke Bruerne was a small simple Hamlet, it had a figure of either setting, it had a church surrounded by thatched cottages, and then there was the farms in separate areas. Most of the people who lived there were farmhands and had very low wages, they also did not have much if any knowledge of other villages/towns, they also rented there houses from landowners like the Hesketh's and the Duke ...read more.

social because of more people were living there and there was a higher demand for goods as many many canal boats passed through daily with there own separate needs, also the new jobs that were available were now better paid because they required a higher level of skill and they were usually very dangerous. Also there was better quality food as there was a higher demand, the food was now usually fresher, also there was a lot more meat which helped to balance there diet, and there was more dairy products, so the health of the community improved and so did the life expectancy, and infant mortality lowered. Houses also improved, houses were now cleaner, mainly because soap was now carried through Stoke Bruerne, houses were also improved with slate and bricks now that they traveled through Stoke Bruerne, houses were also warmer because coal prices lowered and people became richer to buy the coal with, some houses now also started having glass in there windows, and there was now also a 'school pence tax' which paid for the first school in Stoke Bruerne. There was not many complaints about the canal because either they could not write a formal complain or they did not have any power to put there word forward, but one person who did complain was the Rector, he complained because his garden was cut in half, he managed to get a bridge put up so that he could go collect his fish for Fridays dinner from his pond on the other side. ...read more.

Horse and cart on the A5 would have been the canals main competition. I am able to use other sources to prove Blagrove's Evidence e.g. the 1844 map shows the rector's land split in two. The second written source is by Whittaker written in 1879, although this is a secondary source it is the earliest written source available to me and he also used primary evidence, it was the only source that contained population figures but its downside is it is a re-write and having not seen the original I am unable to find out weather or not valuable information has been lost. The Last Written source I wish to discuss is written by Lawrence Wood in 1975. It is a secondary source but Wood would of have had access to primary information such as marriage, death and birth certificates and information from parish records, the biggest problem with this source is that it does not even mention the canal and really it is produced for visitors/tourist's to the church. The two maps I used were dated 1844 and 1920. The 1844 map shows the layout of the canal side in Stoke Bruerne when the canal was at its busiest showing building bridges and locks. The 1920 map shows that the barge marina had been filled in, proving the canal's decline as mentioned by Blagrove. Therefore I have been able to prove that the canal's construction through the village of Stoke Bruerne changed the village socially, peoples job's changed, physically, the centre of the village was no longer the church and financially, I can assume that living conditions and health improved and the canal company's made large profits. Rien Sach 11AD 30/1/03 2,670 Words. 1 ...read more.