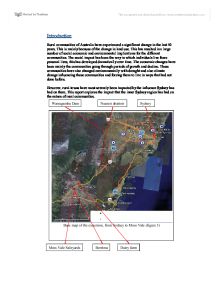 Sydney to the southern highlands

Introduction Rural communities of Australia have experienced a significant change in the last 50 years. This is mainly because of the change in land use. This has resulted in a large number of social economic and environmental implications for the different communities. The social impact has been the way in which individuals live there personal lives, this has developed dramatically over time. The economic changes have been mainly the communities going through periods of growth and decline. These communities have also changed environmentally with drought and also climate change influencing these communities and forcing them to live in ways that had not done before. However, rural towns have most severely been impacted by the influence Sydney has had on them. This report explores the impact that the inner Sydney region has had on the nature of rural communities. An urban transect across Sydney As you leave Sydney and the Central Business District (CBD) and head towards the Sydney urban fringe land use changes dramatically. As you make this journey it is obvious how there is a slow change from mainly commercial buildings, to industrial factories and residential areas and then finally to rural housing and farmland. This can be obviously seen from figure 2 which is an urban transect from Sydney to Moss Vale. ...read more.

Many of the houses fell into disrepair or were pulled down. 1920's - a period of growth When the Southern Portland Cement Company set up outside of Berrima in the 1920's the town experienced a period of growth. Also with the increasing use of the car and the location of the town on the road to Canberra some of the services were increased. Otherwise the town remained a small centre used by travellers until the 1970's. Growth Period 1970 - 1990 With better roads and use of the car in the 70's Berrima became a popular tourist area within a few hours of Sydney. The fact that many of its buildings were retained from the 1830's gave it tourist appeal. Most of the buildings since then have been restored, although in most cases they have not been used for their original purposes. The Gaol is still used and can be seen in figure 4. In WWII it was used as a German internment camp and now it is used for low security prisoners. For the 70's and 80's Berrima enjoyed great popularity as a stop over point for motorists and tourists as it was on the busy Hume Highway. Its population also grew with many weekenders and residents who could now commute to other towns easily from Berrima. ...read more.

However as Sydney stretches further and further outwards, land that was previously used for dairies is now becoming housing. This is because the land is worth a lot more and there is a great deal of pressure on farmers to sell. It is becoming increasingly costly for farmers to continue a dairy farm because of environmental concerns. Dairy farms produce a lot of waste and it is therefore crucial that this does not negatively impact on the environment so it is closely monitored. Many farmers have left the business because they are not able to pay for the removal of such large quantities of waste Response to Challenges Noel Snowden's farm has responded to the challenge of maintaining the Sydney Water Catchment, by coming up with a very clever, very innovative idea, called the wetlands scheme. This scheme is clearly outlined below in Figure 10. Noel uses this system to prevent any excretion from entering the catchment area. There is a growing demand for the land that Noel and many other farmers own, as Sydney stretches outwards. There is a large amount of pressure put on farmers to sell, so people can have hobby farms (farms used mainly for fun such as vineyards). Noel has completely ignored this so called pressure; he has started leasing land off other people as well, so he can increase his production Figure 10. Noel Snowmen's Wetlands Scheme ?? ?? ?? ?? Tom Chancellor Year 9 Ge2 Geography set: 2 9/10 ...read more.