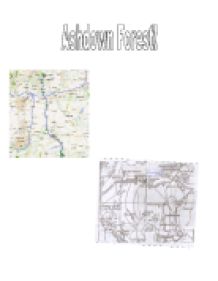 Landscape Geology Ashdown Forest's landscape is greatly influenced by its underlying geology, which is mostly the sandstone and siltstone of the Ashdown Sands. When these stones combined with a local climate that is generally wetter, cooler and windier than the surrounding area owing to the Forest's elevation, rising from 200 feet (61 m) to over 700 feet (210 m) above sea level, give rise to sandy, largely podzolic soils that are characteristically acid, clay, and nutrient-poor. These poor, infertile soils have favoured the development of heath land, valley mires and damp woodland. These conditions have never favoured cultivation and have been a barrier to agricultural improvement, but they have favoured hunting activities, woodland industries and extractive industries. Climate Summer is the warmest time and best for walking cycling etc; winter months can be cold and a little damp. It is advisable to take a light coat if the weather looks a bit iffy, just to keep you dry if anything; when the wind blows it can get quite cold on the ridges, however most of the valleys and copses provide enough shelter. Average climate in winter as follows Temperature Throughout the month of November daytime temperatures will generally reach highs of around 11�C. ...read more.

River Features Source Source is the beginning or start of a river. As the river moves through the upper course it cuts downwards. The gradient here is steep and the river channel is narrow. Vertical erosion in this highland part of the river helps to create V-shaped valleys, interlocking spurs, rapids, waterfalls and gorges. * As the river erodes the landscape in the upper course, it winds and bends to avoid areas of hard rock. This creates interlocking spurs, which look a bit like the interlocking parts of a zip. * When a river runs over alternating layers of hard and soft rock, rapids and waterfalls may form. Meanders In the middle course the river has more energy and a high volume of water. The gradient here is gentle and lateral (sideways) erosion has widened the river channel. The river channel has also deepened. A larger river channel means there is less friction, so the water flows faster: * As the river erodes laterally, to the right side then the left side, it forms large bends, and then horseshoe-like loops called meanders. * The formation of meanders is due to both deposition and erosion and meanders gradually migrate downstream. ...read more.

As we were moving towards the site D, the river was less deep. Niagara Falls Niagara Falls is located in western New York state and southeastern Ontario, Canada. There are falls on both sides of the Niagara River, in Canada as well as the United States. The Canadian Horseshoe Falls plunge 170 feet down. The American Falls plunge 100 feet. This beautiful waterfall is a popular tourist destination, bringing millions of visitors to the area each year. It also serves a more practical purpose in providing electricity to Ontario and New York. Creation Niagara Falls is approximately 12,000 years old. The falls were formed when melting glaciers began to form the large freshwater lakes now known as the Great Lakes. The water in Lake Erie ran downhill toward Lake Ontario, forming a river. This river crosses a ridge known as the Niagara Escarpment. The area where this river falls over the cliffs of the Niagara Escarpment is known as Niagara Falls. Erosion As water rushed over the Niagara Escarpment, it eroded the rock underneath, forming the Niagara Gorge. Until the 1950s, Niagara Falls eroded more than 3 feet of the escarpment each year, slowly moving the falls back. Water diversion programs have since reduced the erosion significantly. The Encarta encyclopedia reports that the falls now recede only about 1 foot every 10 years. ...read more.