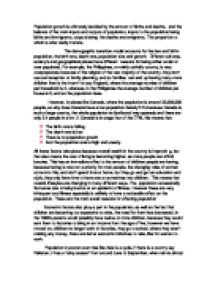 The demographic transition model accounts for the rise and fall in population, the birth rate, death rate, population size and growth.

Population growth is ultimately decided by the amount of births and deaths, and the balance of the main inputs and outputs of population, inputs to the population being births and immigrants, outputs being the deaths and emigrants. The proportion to which is what really matters. The demographic transition model accounts for the rise and fall in population, the birth rate, death rate, population size and growth. Different cultures, society's and geographical places have different reasons for being either under or over populated. For example, the Philippines, a mainly catholic country, is very overpopulated, because of the religion of the vast majority of the country, they don't use contraception or family planning, and so families can end up having many more children than is the 'norm' for say England, where the average number of children per household is 2, whereas, in the Philippines the average number of children per house is 5, and so the population rises. ...read more.

This means that overall, lifestyles are changing in many different ways. The population occasionally fluctuates due to baby booms or an epidemic of illness. However these are very infrequent and illness especially is unlikely to have a noticeable effect on the population. These are the main social reasons for affecting population Economic factors also play a part in the population, as well as the fact that children are becoming too expensive to raise, the need for them has decreased, in the 1800's parents would possibly have twelve or more children, because they would sent them to factories to bring in an income from the age of five, however we have moved on, children no longer work in factories, they go to school, where they aren't making any money, there are better economic initiatives to take, like for women to work. ...read more.

The Death rate is low because of the further advances in medicine and health care, and in Britain especially, the free NHS, meaning that the population is slowly ageing, because of again the increased cost of living means people are still not having children. Most LEDC's are in stage two, stage one being the Amazonian tribes. MEDC's are in stage three, four and five, with the occasional NIC, or Newly Industrialised Country, like Brazil. So to summarise, in parts of the word population is growing, in some parts it is falling, due to social, cultural, economic and environmental factors: * Better health care * Higher life expect antsy * Better hygiene * The changing roles of women * Increased standard of living * Better family planning * Cost implications of having children There will always be extremes Like china, where there is a one child per family limit, to attempt to get the population under control! ...read more.

Overall the response to the question is very good, as the candidate discusses in reasonable depth about each stage of the demographic transitional model (DTM). The answer also talks about the DTM as a whole model, however, no negative outlooks ...

Overall the response to the question is very good, as the candidate discusses in reasonable depth about each stage of the demographic transitional model (DTM). The answer also talks about the DTM as a whole model, however, no negative outlooks on the DTM are given, which are always important to note. The answer also includes the movement of a country through the DTM and the effects on the population, which is an excellent response. Appropriate case studies are used, although they could be more in depth/more case studies could be used i.e. one for each of the 4/5 stages of the DTM. So although the response is adequate it would have to include more insight to gain top marks.

There is a good level of analysis, but again more detail could be included. There are some good statistics mentioned, for example the population of 33,000,000 people in Canada, which is an excellent comparative to use, but unfortunately it was not compared to any other case study. Mentioning the NHS was also very good, as it major conveys differences between certain factors in a country such as healthcare which directly affect the population and their position in the DTM. The case study of Cuba could have been used to show that different political regimes also have an affect on a country in comparison to its neighbouring countries. The brief note of NICs and BRICs was excellent as it shows the candidate is at a higher level.


The quality of writing was very good through, however, instead of using the term richer and poorer countries, the terms LEDC and MEDC should have been used throughout. Punctuation was excellent.