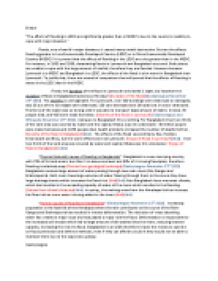 The effects of flooding in LEDC are significantly greater than in MEDCs due to the countrys inability to cope with major disasters. Discuss

﻿Shearn ?The effects of flooding in LEDC are significantly greater than in MEDC?s due to the country?s inability to cope with major disasters.? Floods, one of world?s major disasters, it caused many untold destruction. But are the effects flooding greater in Less Economically Developed Country (LEDC) or in More Economically Developed Country (MEDC)? It is proved that the effects of flooding in the LEDC are a lot greater than in the MEDC. For instance, in 1952 and 1998, devastating floods in Lynmouth and Bangladesh occurred. Both places are unable to cope with the large amount of rainfall, therefore they are flooded. However because Lynmouth is a MEDC and Bangladesh is a LEDC, the effects of the flood is a lot worst in Bangladesh than Lynmouth. To justify that, there are several of comparison that will proved that the effects of flooding is worse in the LEDC than in the MEDC. Firstly, the duration of the flood in Lynmouth only lasted 1 night, but however the duration of flood in Bangladesh lasted over 56 days! (Duration of the flood)(Geobytesgcse November 21st 2010). The severity is unimaginable. For Lynmouth, over 100 buildings were destroyed or damaged; also 28 out of the 31 bridges were destroyed, 130 cars destroyed and 19 boats lost in sea or destroyed. ...read more.

(Flood causes) (ibid). Geobytesgcse ?Positive effects of flooding in Bangladesh? (Geobytesgcse November 21st 2010), it provides water for the crops, when flooding occurs; there is friction between the water and the ground. The loss of energy results in the deposition of rich fertile soil, which ended up providing important nutrients enabling people to grow crops. The deposition of silt also creates land upon people can live ? for example the Ganges delta has been formed this way as deposition had occurred where the river has entered the Bay of Bengal.(ibid)(ibid). ?Negative effects of flooding in Bangladesh? (Geobytesgcse November 21st 2010), over two thirds of the land was covered by water and the capital, Dhaka was 2m underwater. 30 million people were homeless. (ibid)(ibid). 1,070 people died, most of these deaths were resulted from drowning, however some were caused by health problems, due to the contamination of water by the dead bodies of animals and people, the lack of clean water encourages the spread of diseases such as cholera and typhoid. (ibid)(ibid). Food supplies were severely affected as the flood had destroyed rice stocks with a total of 668,529ha of crops. (ibid)(ibid). this is a huge impact to the world?s economy as, as Bangladesh?s export industries had suffered a 20% decrease in production with over 400 clothing factory forced to close. (ibid)(ibid). ...read more.

(ibid)(ibid). The country solely relies aid from other countries as it could not provide aid for itself. (ibid)(ibid). Also it is difficult to mobilize rescue things, because as I had already said that LEDC do not have the financial capability to afford the training. Not only that most of the areas with be isolated during the flood, due to the debris from damaged infrastructures. Most LEDCs concentrate their funds on exporting goods, again lack of funds for flood defenses. Again due to poverty most of LEDCs population settle compactly and in small areas and the population are usually massive therefore some are force to live on floodplains or flood prone areas. ?Reason why MEDCs effect of flooding is slightly better? (Geobytesgcse November 21st 2010). It is due to the reason that MEDC?s homes are stronger because they are constructed from better and stronger. Governments in MEDCs have the ability to invest more on flood defenses systems because they are more financially stable. (ibid)(ibid). The government of MEDC usually discourages new estates being built on flood plain areas or areas which are prone to flooding. As I had already stated earlier, I agree that the effects of flooding in LEDC?s are significantly greater than in MEDC?s due to the country?s inability to cope with major disasters. The comparison I did on the floods that occurred in Bangladesh and Lynmouth should already clearly proven this statement. ...read more.