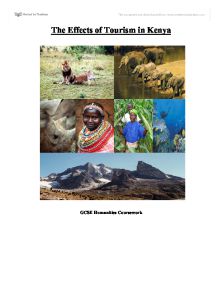 The Effects Of Tourism In Kenya

The Effects of Tourism in Kenya GCSE Humanities Coursework Introduction Kenya lies on the east coast of Africa. It is bordered by five countries and the Indian Ocean. It is 1 degree north of the equator and has a land mass of 582,650 square metres. Over 32 million people live in Kenya and the main language is Swahili (Fig 1). Figure 1 - Map of Kenya, to scale Kenya has many varied attractions. One of the biggest attractions is the opportunity to see the amazing range of wildlife on the grassland areas called Savannah. It is home to such animals as elephants, lions, cheetahs, zebras, giraffes, hippos and crocodiles. This has attracted big game hunters, zoologists, and lovers of wildlife who want to see the 'big five - elephant, lion, leopard, buffalo and rhino' on safari. Another tourist attraction is the mountainous areas which include 5,199m tall Mt. Kenya, which has glaciers at the top (Fig 2). This attracts experienced climbers, geologists, scientists, trekkers, walkers and even white water rafting enthusiasts who travel to Kenya when the glaciers melt to enjoy the fast rushing water. A series of lakes in the Great Rift Valley including Lake Victoria and Lake Turkana are inhabited by flamingoes, hippos and rhinos, and bring lovers of wildlife to its shores. The coastline is another main area of attraction. The coast borders the Indian Ocean and has brought holiday makers to its white sandy beaches and warm, clear waters, where coral reefs team with life (Fig 3). Just behind the coast there are both coastal forests and inland forests. ...read more.

Together, these two quotes indicate how tourism can have a negative impact on the wildlife in Kenya. Mombasa The coastal town of Mombasa is the second largest city in Kenya, with a population of half a million people. It is located in the South East part of Kenya, lying on the edge of Indian Ocean, and the total size is 1002 miles. It has the best natural harbours on the whole coast, having two ports, one old and one new. Centuries ago, traders from Arabia anchored in Mombasa and set up businesses and built 'Arab Towns', which included mosques where they could worship Islam. This influx of Arab merchants has shaped how Mombasa is today with over 50 mosques and a large Muslim community. Muslim women are often seen wearing the black, loose fitting bui bui dress, along with a black head covering (hijaab), and they also sometimes wear a veil (nikab) (Fig 7). Because many people on the coast are Muslims, the festivals and ceremonies of Islam are very important occasions. Figure 7 - Traditional Muslim female attire Figure 8 - Shanty town Today Mombasa is a city of contrasts, with exotic luxurious buildings and a sprawl of informal settlements or 'shanty towns' at the edge of the city (Fig 8). Mombasa plays an important part in the country's economy, not only from imports and exports, but also as a tourist destination, as it has the best white sandy beaches and coral reefs that Kenya has to offer. I am now going to discuss how the above factors have had both a positive and negative impact on this area. ...read more.

It has developed its road, rail and air communications systems, as well as improving services such as telephones, hospitals and public utilities. This has not only helped cater for the tourists, but also the needs for the local people. Tourism in Less Economically Developed Countries, LEDC's, can also bring environmental and social problems. Most of these advantages and disadvantages can apply to tourist locations anywhere in the world. However, the disadvantages may be more severe for LEDC's. For example, management and stewardship of the environment are more difficult in countries like Kenya because they lack the human expertise and money to be as effective as More Economically Developed Countries, MEDC's. Also, much of the technology and many of the materials which are essential for setting up the facilities and services needed for large scale tourism in LEDC's have to be brought in from MEDC's. Therefore tourism must be seen as sustainable, it must benefit the locals. If badly managed, tourism will not improve the quality of life of people living in LEDC's, such as Kenya. Most of the money will only benefit wealthy foreign people and companies. The life expectancy in Kenya is only 49 years, and the mortality rate of infant births is 79 deaths in every 1000 live births. The Gross National Income is only 20.9 billion, in comparison to Britain's 1151 billion. Only 46% of the population in rural areas have approved drinking water, and access to a clean water supply is still a problem for many Kenyans. LEDC's like Kenya need to produce as much money as possible from tourism to counteract these problems. Tourism is Kenya's largest source of income. A large percent of the country depend on it, for a source of income, and to support their families. ...read more.