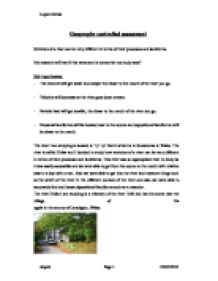 This affected our overall results as we were not able to accurately measure site 6 and 7 so it made our results invalid. Velocity will decrease as the river goes down stream. We then wanted to measure the velocity of the river. This was achieved by using two different methods. The first method was using the 10 metre downstream and measuring how long the river takes to transport the ball from start to finish. Also we used a flow meter which measures the velocity per second of the water. This was done by 8 people. 2 people were at the starting point of the 10 metres and were dropping the balls and the other 4 were at the finish point and where catching the ball at the 10 metre point. We used the same ball to make the test more accurate. To find this out, we used balls because it was easier to float on the river and measure how long it took for it to go 10 metres. Also we used the same ball(s) so that the test would be reliable and more accurate. As with the previous sub-hypothesis we chose 7 sites to get our sampling from because it made our data more accurate as it allowed us to measure the size of rocks and also the change in width and depth across from the upper course to the lower course of the river. ...read more.

However, there were some outliers that I came across while assembling my data such as the mean velocity in site 2 and the mean particle volume in site 3. These didn't fit with the Bradshaw model. They may be due to human error as in the mean velocity in site 2 the flow meter may not have been used accurately and as for the anomaly in the mean particle volume in site 3, this may be because the stones that were picked up might have been from an area of deposition while the others that fit with the Bradshaw model may have been picked from an area of erosion. My research will test if this statement is correct for my study area? The research I have carried out to test if the statement 'Stretches of a river can be very different in terms of their processes and landforms' has proven to be correct for my study area which was Ty' ny' Berth which is in Snowdonia in Wales. It is true because of the following reasons which are the fact that the upper course has depositional landforms has meanders while as we move closer to the mouth of the river we can see that depositional landforms such as waterfalls and floodplains start to appear. And also we can see that the interlocking spurs that were visible at the uppercourse of the river became wider as we moved downstream and floodplains began to appear. ?? ?? ?? ?? Lopez Okhiai olopez Page 1 05/02/2012 ...read more.