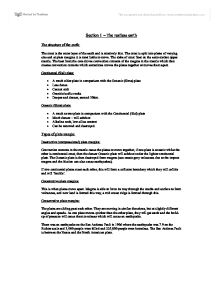 The structure of the Earth and the impact of volcanic eruptions.

Section 1 - The restless earth The structure of the earth: The crust is the outer layer of the earth and is relatively thin. The crust is split into plates of varying size and at plate margins it is most liable to move. The slabs of crust float on the semi-molten upper mantle. The heat from the core drives convection currents of the magma in the mantle which then creates convection currents which sometimes moves the plates together or moves them apart. Continental (Sial) plate: * A much older plate in comparison with the Oceanic (Sima) plate * Less dense * Cannot sink * Granitic/acidic rocks * Deeper and denser, around 30km. Oceanic (Sima) plate: * A much newer plate in comparison with the Continental (Sial) plate * Much denser - will subduct * Alkaline rock, low silica content * Can be renewed and destroyed. Types of plate margin: Destructive (compressional) plate margins: Convection currents in the mantle cause the plates to move together, if one plate is oceanic whilst the other is continental crust, then the denser Oceanic plate will subduct under the lighter continental plate. The Oceanic plate is then destroyed form magma (can create grey volcanoes due to the impure magma and the friction can also cause earthquakes). If two continental plates meet each other, this will form a collision boundary which they will collide and will 'buckle'. Constructive plate margins: This is when plates move apart. Magma is able to force its way through the cracks and surface to form volcanoes, and new land is formed this way, a mid ocean ridge is formed through this. ...read more.

Monitoring and predicting volcanoes: Earthquakes are a frequent sign of an impending eruption, though you cannot know exactly when the eruption will be. The bulge that appeared on the northern flank of the Mt St Helens was evidence of magma movement. This could have been monitored easily by 'tiltmeters' which can identify small, subtle changes to the environment. GPS can use satellites to detect movement of as little as 1mm and the change in temperature of the surface can be seen on satellite images. Digital cameras placed on the rim of the volcano can monitor changes. Robots can monitor changes by collecting samples to check the amounts of sulphur dioxide (increasing levels suggest that there will be an eruption). From previous patterns of lava flows, ash movement and lahars, it allows for people to prepare for an eruption by organising the evacuation and arranging supplies. Supervolcanoes Supervolcanoes are on a much bigger scale and do not have characteristic cones, but they have large depressions called calderas. Fissures are lines of weakness which allow magma to escape. During the explosion there are vents which allow for the magma to reach the surface. Yellowstone: Can affect North America and the whole world. There is evidence that the magma beneath Yellowstone is shifting and the caldera is bulging up beneath the lake. The ground has risen 70cm in places. Considering the side of its 80km long magma chamber, it is potentially five times the minimum size for a supervolcanic eruption. An eruption is likely to destroy 10,000 km^2 of land, kill 87,000 people and 15cm of Ash would cover buildings within 1000km and 1 in 3 people will die. ...read more.

Tsunami - LEDC Indian Ocean: When - 26th December 2004 Where - Countries that bordered the Indian Ocean, i.e. Indonesia, Thailand, India and Sri Lanka. Why - The Indo-Australian plate subducted beneath the Eurasian Plate. What - Measured 9.1 on the Richter scale, the highest wave to come ashore was 25m. Effects of the tsunami: * Around 230,000 people were killed, 650,000 were injured and 2 million became homeless. * Whole towns and villages were destroyed. * Infrastructure of many countries (roads, water pipers and electricity lines) was damaged. * Public buildings like schools and hospitals were wiped out. * About 1,500 settlements were wiped out. * 5-6 million people needed emergency food, water and medical supplies. * There was massive economic damage, fishermen lost their jobs and the tourism was affected. * There was environmental damage as the salt water affects growth and coral reefs were destroyed. Responses: Short term: * Hundreds of millions of pounds had been given to foreign governments, NGOs and individuals to give survivors water, food, shelter and medical attention. * Foreign countries set ships, planes and soldiers to rescue people, distribute food and water and to begin to clear up. * UK government gave 75 million pounds and the public gave 100 million as well. * The international community gave fresh water, water purification tablets, food, sheeting and tents as aid. Long term: * Billions of pounds had been given to re-build the infrastructure. * Programmes had been set up to re-build houses and to help people get back into work. * A Tsunami Warning System had been put up in the Indian Ocean in June 2006. * Disaster management plans were set up, and volunteers have been trained who will know how to react to a similar situation. * Plans to spend 190 million to build 20,000 houses for 100,000 homeless people. ...read more.