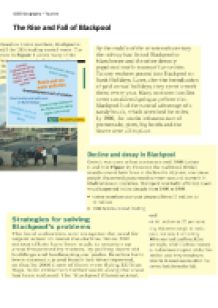 Transfer-Encoding: chunked ﻿GCSE Geography ? Tourism The Rise and Fall of Blackpool Why Blackpool has declined - Social, Economic and Environmental points Problems in Blackpool Solutions to the problems It was raining in Blackpool which drove away the tourists . Indoor swimming pools and attractions . There is upgraded sea centre . There is the world?s largest mirror ball . There is the Blackpool tower which gives an amazing view of the Blackpool coastline , this attracts in the tourists. It was hard to get to M55 was completed as the motorway link from the M6 Package holidays became cheaper which was competition for Blackpool St John?s square is now there , this brings in tourists . This has been pedestrianised with new greenery , paving and lighting . This has enhance the reputation and atmosphere of Blackpool . A wave sculpture has been added in and there is Wi-Fi , this attracts in the younger generation . Blackpool become overcrowded , there was a lack of parking More parking has been added in Blackpool had an increase in the number of hen do?s and stag parties , this meant there was more drunks around . At night you can go to Brilliance which is a light show which allows you to explore the town Lack of shopping centres Hound shill shopping centre has been redeveloped with popular chain stores such as Debenhams . ...read more.

Coastal Defence Blackpool has a marine frontage of about 11.25 kilometres, all of which is protected from erosion by the sea wall, which needs constant maintenance. Under the Coastal Protection Act the Council must ensure the stability of the sea walls and ensure their continuing maintenance, for which a detailed Coast Protection Strategy was adopted by the Council in 1995.Blackpool Council is nearing completion of a twenty year coastal defence strategy which seeks to rebuild those sections of defence most in need . £62 million of works have also been completed transforming the promenade between the Sandcastle Centre and North Pier, and a new 3.2 kilometre seawall has been built along the same stretch Blackpool and Wyre Councils are working in partnership to improve and replace sea defences between Rossall Hospital and Rossall Point and from Kingsway to Little Bispham at Anchorsholme, protecting 12,000 properties from the risk of coastal flooding. Defra and the Environment Agency formally approved £86million of funding in October 2013 and construction began in April 2014. The huge programme of work is expected to be complete in 2016. REVISION QUESTIONS With reference to an example in the uk, explain the reasons for the growth of a resort as a tourist destination (8 MARK EXAM QUESTION) In the 1850’s , Blackpool was a small village by the sea with a population of 300. ...read more.

They also provide lifeguards to keep tourists safe so that the area is attractive. They have trams (and plan to spend £85m to improve the line to Fleetwood) and a new park and ride system to cut down on traffic congestion . The beach itself has to be protected from erosion so there a new project for reconstructing the damaged sea defences by replacing the sea wall and maintaining groynes. New Spanish steps leading down to the beach will help protect against erosion and give public better beach access. They have also reduced the amount of sand that companies can take from the nearby beaches. In 1994, the Pepsi Max Big One roller coaster opened – the tallest , fastest one in the world at the time. People can easily fly to hot climates so they are increasing attractions such as redeveloping Tower Festival headland as an open-air events space. In 2011 the Sands Venue is being redeveloped as a world-class restaurant with entertainment in order to raise the profile of Blackpool and attract higher income visitors. The illuminations have always extended the season into October and this is constantly updated with new displays such as 2009s Dr who section. Blackpool’s visitors dropped from 13 million in 1998 to 10 million in 2008 but by the end of 2009 they had 12 million and now families are staying for longer holidays. It still attracts large numbers of stag nights which is a negative factor. ...read more.