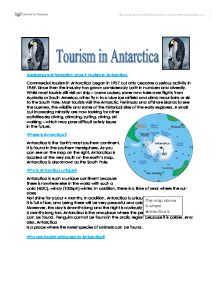 Background information about Tourism in Antarctica. Commercial tourism in Antarctica began in 1957 but only became a serious activity in 1969. Since then the industry has grown considerably both in numbers and diversity. Whilst most tourists still visit on ship - borne cruises, some now take over flights from Australia or South America, other fly n to a blue ice airfield and climb mountains or ski to the South Pole. Most tourists visit the Antarctic Peninsula and offshore islands to see the scenery, the wildlife and some of the historical sites of the early explorers. A small but increasing minority are now looking for other activities-sky diving, climbing, surfing, diving, ski walking - which may pose difficult safety issues in the future. Where is Antarctica? Antarctica is the Earth's most southern continent. It is found in the southern hemisphere. As you can see on the map on the right, Antarctica is located at the very south on the earth's map. Antarctica is also known as the South Pole. Why is Antarctica unique? Antarctica is such a unique continent because there is nowhere else in the world with such a cold (-80C), windy (100kph) winter. In addition, there is a time of year where the sun does Not shine for about 4 months. ...read more.

In the future, they will have to find a way to preserve the continent in order to save it for the future. The development is also becoming better very rapidly, so it will be easier to come up with a plan to allow tourists yet still keep Antarctica in good conditions. These tourists are completely violating the continent and eventually there will not be one for us to enjoy. It is up to us to preserve it as long as it can be. If you want this elite continent on our planet then you need to think before you do something. What makes people go there? * The relentless cold weather; in winter the temperature ranges from 40 - 70 degrees Celsius whilst in summer it ranges from minus 15 - minus 35 degrees Celsius * The scenery is impressively beautiful which you cannot experience by looking at photos. It can only be appreciated with live vision. It is truly breath taking and cannot be viewed anywhere else in the world. Why do tour operators want to take people to Antarctica? * As mentioned Antarctica is unique, so maybe tour operators want to show unusual parts of the world and Antarctica is unusual. * Antarctica is an expensive place to visit, so some tour operators might be in it for a large profit. ...read more.

This will really harm their health, as they are not use to humans. Food Cycle is being harmed - Food chains are being damaged severely The Antarctic Food Web. Why should we be allowed to go? * Tourists believe that they should be allowed to visit Antarctica. * Up until now, the impact humans have had on the area has been very little because of the cold weather. This issue has stopped many people to travel to the continent. * Antarctica is an unbelievable holiday destination as well as scientific purposes. The extreme weather conditions are a different experience and would appeal to a large number of people. These people should be allowed to go there. * Since 1991, there has not been much disturbance in Antarctica, which proves that the International Association of Antarctica Tour Operators must be doing their jobs right as the conditions on the continent are steady. * New Codes like the 'Antarctic Code' are being introduced that aim to reduce the probability of accidents like oil spills and animals being debilitated from the escalating numbers of ships that are sailing around Antarctica. * The money produced through the tourist industry in Antarctica could be invested into additional research of the continent and understanding it. My opinion is that tourism in Antarctica should be banned because Global warming is increasing and Tourists are a threat to the wild life also the environment is being damaged and pollution is escalating and food chains are being harmed. ...read more.