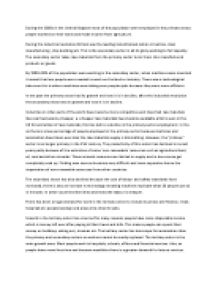 ﻿During the 1800s in the United Kingdom most of the population were employed in the primary sector, people worked on their lands and made income from agriculture. During the industrial revolution Britain was the leading industrialised nation in textiles, steel manufacturing , ship building etc. This is the secondary sector in all its glory working to full capacity. The secondary sector takes raw materials from the primary sector turns them into manufactured products or goods. By 1900s 50% of the population were working in the secondary sector, when machines were invented it meant that less people were needed to work on the land or industry. There was a technological take over this is where machines were taking over peoples jobs because they were more efficient. ...read more.

In the uk there is a low percentage of people employed in the primary sector because machines and automation have taken over also the raw materials supply is diminishing. However, the ?primary? sector is no longer primary in the 21st century. The productivity of this sector has declined in recent years partly because of the extinction of some ?non-renewable? resources such as agricultural land, oil, coal and other minerals. These mineral resources are limited in supply and in due course get completely used up. Finding new sources becomes very difficult and more expensive hence the importation of non-renewable resources from other countries. The secondary sector has also declined because the cost of labour and safety standards have increased, there is also an increase in technology meaning machines replicate what 20 people can do in minutes. ...read more.

This means people can spend their money on holidays, eating out, cinemas etc. The tertiary sector has less scope for automation than the primary and secondary sectors so workers cannot be easily replaced. The tertiary sector is the main growth area. Most people work in hospitals, schools, offices and financial services. Also, as people have more free time and become wealthier there is a greater demand for leisure services. Therefore more jobs become available in the tertiary sector. Below is a chart which shows the changing employment structure in the uk from the 1800s to present day there is a huge decline in the primary and secondary sectors and rise in tertiary sector. Currently the uk has 82% population working in the tertiary sector and 15% in the seconday sector and around 3% in the primary sector. http://www.bbc.co.uk/schools/gcsebitesize/geography/economic_change/characteristics_industry_rev3.shtml ...read more.