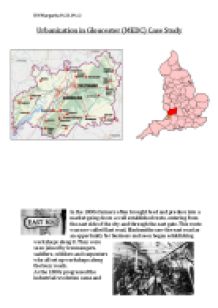 ﻿HWMargarita M.23.09.12 Urbanization in Gloucester (MEDC) Case Study In the 1800s farmers often brought food and produce into a market going down a well established route, entering from the east side of the city and through the east gate. This route was now called East road. Blacksmiths saw the east road as an opportunity for business and soon began establishing workshops along it. They were soon joined by ironmongers, saddlers, cobblers and carpenters who all set up workshops along the busy roads. As the 1800s progressed the industrial revolution came and with its help the city soon began to take shape. The industrial revolution brought coal powered, steam driven machinery to the already established workshops and transformed them into small factories. The factories required a constant supply of coal, so in the 1830s the city had built a network of canals with barges distributing coal around the city. Factories thrived and expanded and they needed a large workforce, which soon migrated into the city. The factory workers need accommodation so small terrace houses were built. ...read more.

In the 1970 the same idea was applied to the city center. The Victorian terrace houses that were homes to the factory workers were demolished and were replaced by blocks of flats and the old factories replaced by modern office blocks. The city center was now growing upwards. By the 1980s the city grew tired from living in tower blocks and now wanted affordable modern houses with their own small plot of land. The 1980s housing estate era had now begun. Greenfield sites on the outskirts had now been transformed into housing estates. The houses were small and practical, first time buyers purchased many of which. The city had continuing growing outwards for the next decade. In the 1990s the city planners introduced a new policy of urban regeneration. The city?s brownfield sites were redeveloped. Old factories and warehouses were converted into luxury flats. Other factory sites were turned into temporary housing and leisure facilities. During the last 5 years the city had continued to re-generate its brownfield sites but the pressure to build on the Greenfield sites is continuingly increasing so it is very likely that over time the city will continue growing outwards. ...read more.

People grew tired of the tower blocks and wanted small affordable homes, the 1980s estate era began 12. Brownfield sites were turned into new homes, old factories and warehouses turned into luxury flats and leisure facilities 13. The city is continuing growing outwards Urbanization in South Africa (LEDC) Case Study Why do young people move from the rural areas to the cities? Push factors from rural areas 1. Rural life provides few basic services 2. People need to collect drinking water from a well 3. There may be little sanitation 4. No electricity 5. People make a living from farming but droughts and crop failures can damage their livelihoods and push them into poverty 6. Agricultural life is physically demanding, people have to work long hours for little pay 7. There are few jobs outside of farming 8. Unemployment can be a problem 9. There is little to occupy young people besides village life Pull factors to the city 1. The prospect of higher employment and wealth 2. Better services such as piped water supply, sanitation and healthcare 3. Living in a city means that you are usually cushioned from the effects of drought and crop failure. 4. Prospect of a wider range of jobs, not just farming ...read more.