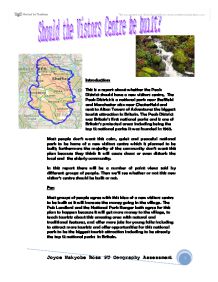 Introduction: This is a report about whether the Peak District should have a new visitors centre, The Peak District is a national park near Sheffield and Manchester also near Chesterfield and next to Alton Towers of Adventures the biggest tourist attraction in Britain. The Peak District was Britain's first national parks and is one of Britain's protected areas including being the top 12 national parks: it was founded in 1963. Most people don't want this calm, quiet and peaceful national park to be home of a new visitors centre which is planned to be built; furthermore the majority of the community don't want this plan because they think it will cause chaos or even disturb the local and the elderly community. In this report there will be a number of point views said by different groups of people. Then we'll see whether or not this new visitor's centre should be built or not. For: Most groups of people agree with this idea of a new visitors centre to be built as it will increase the money going in the village. ...read more.

go ahead with it because it will offer lots of exciting opportunities, and if he works with the other local farmers then he could set up a farm shop which will lead to good profit as more tourist are coming because of the visitors centre, which can help farmers to harvest their farms so they continue with their farms. Against: On the other hand some people do not agree with this idea of a new visitors centre because it will disturb the local residents who don't like loud noises and young people hanging around their area. The Local Resident and the Old Local Farmer both do not want this plan to happen as it will cause more traffic where the roads are busy and narrow, dropping litter, scare the farmers animals and bring pollution to the village which will affect the natural habitat. However, it being one of Britain's protected areas they should reconsider the plan as not everyone wants this "monstarity" (as said by a local resident) ...read more.

The roads will become very busy making it difficult for local residents to walk on the pavement an especially elderly people and young children as the narrow roads are very dangerous to walk if there is a lot of traffic people will just be unable to walk and can't get to the destinations they want to reach. Conclusion: Well, I think that the new visitors centre should not be built because it is going to destroy the natural habitats there as it will consume a lot of money which is not needed. I think that the community should not be disturbed and they should have the quietness they need, as they choose to live in this peaceful village so they have a right to say if this new visitor centre should be built because they are residents there, the visitors centre will bring many tourists who will be expecting more shops where they can buy souvenirs and food. That will cause more rubbish and pollution and the peak district won't be a natural habitat anymore. ?? ?? ?? ?? Joyce Nakyobe Bosa 9U Geography Assessment ...read more.