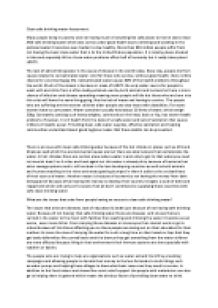 What are the issues that arise from people having no access to clean safe drinking water?

﻿Clean safe drinking water Assessment: Many people living in poverty and not having much of anything like safe places to live let alone clean AND safe drinking water which also comes under good health due to drinking and washing in the polluted water it becomes even harder to stay healthy. More than 884 million people suffer from not having the basic clean water that is 3x the United States population. It is mainly places situated in Asia and especially Africa these water problems affect half of humanity but it really takes place I LEDC?S. The lack of safe drinking water is the cause of disease in the world today. Every day, people die from causes related to contaminated water. And for those who survive, without good health, there is little chance for a normal happy life. Contaminated water causes 80% of the health problems throughout the world. Much of the reason is because in areas of LEDC?S the only water source for people to wash with and drink from is often badly polluted used by both animals and humans So ...read more.

begins a cycle of debt and repayment which will carry on for years if we all don?t contribute to supplying these countries with safe clean drinking water. What are the issues that arise from people having no access to clean safe drinking water? The issues that arise are diseases, lack of education & death just because of not having safe drinking water. Because of not having that safe drinking water there are diseases and viruses that are carried in the water to the rivers with families then washing and drinking the water it becomes even worse , even more dirtier. From carrying these diseases or viruses you then cannot work or go to school because of this illness affecting you so those people are losing out on their education for their mothers its more the case of carrying the water for such a long time on their heads or hips that they get body deformities like curved backs and the chance they get something from the water children are more affected because living in that environment their immune systems are low especially with toddlers or babies. ...read more.

The use of water can be improved in a sustainable way by stopping the massive debts to LEDC?S or at least half the amount so it is payable so that way that country can also help themselves to have clean water with the money that they are saving and with that they can go at a steady pace to paying the money back and it is sustainable because once they are built in areas that it is convenient for people who live there everyone will get safe clean drinking water. A map to show how many people who are actually suffering from this water crisis is below; As you can see in parts of Asia and Africa from the key on the left they don?t really have fresh clean water but are in the oranges and reds which is water stress and by cutting down on how much water the MEDC?S use then more money will be saved to help the less fortunate and if we keep doing this as well as using the sustainable and new recent ideas of providing people with safe water then this water crisis will eventually be solved. ...read more.