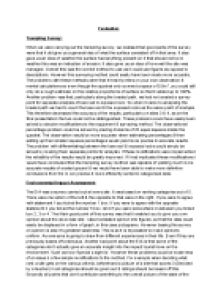 What Impacts Does Tourism Have on Dovedale? - Evaluation of our survey.

﻿Evaluation Trampling Survey: When we were carrying out the trampling survey, we realised that good parts of the survey were that it did give us a general ides of what the surface consisted off in that area. It also gave us an idea of weather the surface had anything present on it that should not be & weather this was an indication of erosion. It also gave us an idea of how well the site was managed. Overall this was the correct method to use as it could use figures as oppose to descriptions. However this surveying method could easily have been made more accurate. The problems with these methods were that it heavily relies on your own observation & mental calculations so even though the quadrat only covered a space of 0.5m2, you could still only do a rough estimate on the relative proportions of surface so that it added up to 100%. Another problem was that, particularly along the braded path, we had not created a survey point for separate analysis of bare soil & exposed rock. So when it came to analysing the braded path we had to count the bare soil & the exposed rocks as the same point of analysis. ...read more.

The second improvement is that the survey should be carried out 3 times at each site. So once when we arrive, another when we are half way through our trip & again at the end of our trip. We could also split up the groups of 4 so that the surveys are done simultaneously & would therefore be more accurate. This would have impacted on my conclusions as I would have been able to look at the variance of the results at different times of the day & explain this to help answer the overall question with more depth & evidence. Photographs of Management: As I was taking the photographs to show evidence I thought the good points of this method is that it is direct evidence from the site that has not been turned into numbers from observation & opinion. So it is pure raw data that only needs to be analysed. The photos also don?t lie & only show what was on the site. However some of the bad points about using photos for evidence is that if you are taking them to show one specific things you are only showing evidence for that & not showing evidence that supports other things. ...read more.

The photos were also very useful for demonstrating various points for analysis around the site. This was it was pure raw, unconverted data form the site. You could also take plenty of them across the whole site to show any form of management you saw. However the only weakness was that if you took a photo of just the sing, not showing where you took it on site it was harder to explain the situation of management it was used in, but overall a very reliable point of analysis. The final method of analysis, which was conducting the questionnaire, proved extremely useful. It enabled data to be put in pie & bar charts so it could easily be compared & trends could also be identified. But it also enabled me to present data in sphere of influence. This conveyed Dovedales? influence in much clearer way then just writing the places from which they came. It also collected data from people who hade experienced different traffic issues surround Dovedale to you, so you could easily see what the most common views & problems surrounding Dovedale were. Overall then I believe that for analysing Dovedale, all the methods used were the correct ones apart from the EIA. The EIA should be replaced by taking photographs as these convey a reliable, opinion free set of data. ...read more.