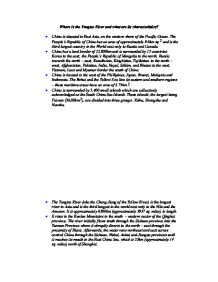 Where is the Yangtze River and what are its characteristics?

Where is the Yangtze River and what are its characteristics? * China is situated in East Asia, on the western shore of the Pacific Ocean. The People's Republic of China has an area of approximately 9.6km sq2 and is the third largest country in the World next only to Russia and Canada. * China has a land border of 22,800km and is surrounded by 15 countries: Korea to the east; the People's Republic of Mongolia to the north; Russia towards the north - east; Kazakhstan, Kinghistan, Tajikistan to the north - west; Afghanistan, Pakistan, India, Nepal, Sikkim, and Bhutan to the west; Vietnam, Laos and Myumar border the south of China. * China is located to the west of the Phillipines, Japan, Brunei, Malaysia and Indonesia. The Bohai and the Yellow Sea line its eastern and southern regions - these maritime areas have an area of 4.73km2. * China is surrounded by 5,400 small islands which are collectively acknowledged as the South China Sea Islands. These islands, the largest being Taiwan (36,00km2), are divided into three groups: Xishu, Zhongshu and Nansha. * The Yangtze River (aka the Chang Jiang of the Yellow River) is the longest river in Asia and is the third longest in the world next only to the Nile and the Amazon. ...read more.

* The Yangtze is home to some of the world's most picturesque sights desired by people the world over. Thus, many people cultivate an interest in the landscape of the Yangtze and make an effort to witness its beauty. Tourists to the Yangtze promote jobs along the river, for example, in order for cruises to happen along the river, boat drivers are required. An increase in the amount of visitors to the river means that a demand for restaurants and tour guides eventuates. These jobs are beneficial for they do not require skills adopted from higher education. As China is an ELDC, fewer people have the advantage to go to school and it is likely that the majority of the population is illiterate. Therefore they cannot employ jobs that require knowledge for it is likely that they have greater ability to complete primary jobs. Those that live upon the Yangtze are probably familiar with the area and so it does not require a lot for them to inform tourists about what they know about the river. The type of boat used for cruising along the river has a simple structure, they do not require fuel, and are made from wood that is easily accessed from the surrounding trees. As a result, those that are not acquired with an education would find it easy to drive along the river to entertain guests whiles earning money at the same time. ...read more.

* Commercial logging in China has inevitably lessened the amount of foliage hence there has been a reduction in infiltration. A loss of water storage has been introduced and soil exposure has increased and has caused an escalation in soil and water transportation downwards. The force of water pounding onto the soil creates a watery mud which flows over surfaces more quickly and easily than solids. This means that the soil combined with the water is prone to movement and travels further along the riverbed picking up more soil as it moves and creating further soil exposure, which then follows the same method once it is unleashed to the water. Siltation, therefore has caused lake and riverbeds to increase in height by nearly 2 metres in 30 years. This welcomes depreciation in the capacity of natural hold in the middle and lower sectors of the river. * Population strains have shrunk the amount of land required for flood control. Farmers have intruded onto areas susceptible to flooding which are planned to contain water. This rapid urban expansion has reduced infiltration - land where water could once be absorbed into the soil with ease has become an ideal settlement for people who have evacuated places elsewhere due to previous flooding. This means that the river water has had to divert and the amount of liquid is not proportional to the surface area causing unwanted inundations. * ...read more.