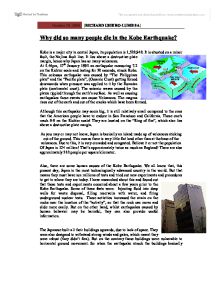 Why did so many people die in the Kobe Earthquake?

Why did so many people die in the Kobe Earthquake? Kobe is a major city in central Japan, its population is 1,528,948. It is situated on a minor fault, the Najima fault line. It lies above a destructive plate margin, hence why Japan has so many volcanoes. At 5.46pm, 17th January 1995 an earthquake measuring 7.2 on the Richter scale and lasting for 30 seconds, struck Kobe. This colossus earthquake was caused by "The Philippines plate" and the "Pacific plate", (Oceanic Crust) getting forced downwards when pressure was applied to it by the Eurasian plate (continental crust). The seismic waves caused by the plates rippled through the earth's surface. As well as causing earthquakes these events can cause Volcanoes. The magma rises out of the earth and out of the cracks which have been formed. Although this earthquake may seem big, it is still relatively small compared to the ones that the American people have to endure in San Francisco and California. These one's reach 8-9 on the Richter scale! They are located on the "Ring of fire", which also lies above a destructive plate margin. As you may or may not know, Japan is basically an island made up of volcanoes sticking out of the ground. ...read more.

Seeing as the earthquake struck in the early hours of the morning, I assume that most people were unaware of disaster that was happening. They were all probably sleeping, so that is why there were so many casualties. The death toll in Kobe was 5,500. As well as also leaving 40,000 injured, the earthquake caused other huge problems in Kobe. Nearly 200, 000 buildings collapsed. 1km of the elevated Hanshin Expressway got destroyed, blocking the roads and making it difficult to get around. As well as 130km of the bullet train route was destroyed, which prevented many people from escaping Kobe. Gas, electricity, food and water supply was disrupted causing many people to start looting and breaking into to shops. 500m wall of fire raged for days as it engulfed the outer regions of the city destroying 7500 houses. Due this an estimated 230,000 people were left homeless, and they had to live in temporary shelters such as: Schools, gyms and open parks. Dust filled the air making it very hard for people to breathe and to see as it blocked out the sun. After the earthquake there were 716 aftershocks felt that lasted days after the main earthquake, 74 were strong enough to be felt by man! ...read more.

No houses from then on were allowed to be made out of brick or clay, the new buildings all had to be made from solid rock, because water rises during an earthquake. Scientists also increase the number of seismic instruments, to record the earth's movement. I conclude that the Japanese government as well as the people took a laid back attitude, to the natural disaster that they knew was coming. Someone should have stood up and say "We need to take action, now, before it gets too late!" But as we know, no one did pluck up the courage to stand up and speak up, and look what happened. The government had the money and the technology to build up their defenses in their country, so they didn't succumb to natural disasters like the one addressed. Japan was the richest, and the most technologically advanced country in the world. But on the contrary, Japanese scientists have since tried to improve prediction of quakes, but seismology is not always accurate and it is extremely difficult to predict when and where quakes will occur. So all in all, they're too many explanations and excuses about why this happened. But we have to face it, and move on. We will truly never know exactly what will happen to something before it is too late. . ?? ?? ?? ?? October 28, 2008 [RICHARD USHIRO-LUMB 9A] ...read more.

This answer contains useful information about the Kobe earthquake, including its causes, impacts and the responses to it. It could be improved by being more focused on the question - why did so many people die? The author hints at the reasons without actually spelling them out.