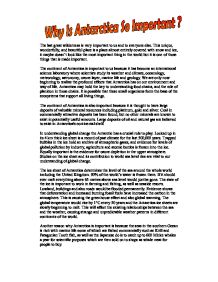 Why is Antarctica so important?

The last great wilderness is very important to us and to everyone else. This unique, wonderfully, and beautiful place is a place almost entirely covered with snow and ice, it maybe doesn't look like the most important thing in the world but it is one of those things that is made important. The continent of Antarctica is important to us because it has become an international science laboratory where scientists study its weather and climate, oceanology, meteorology, astronomy, ozone layer, marine life and geology. We are only now beginning to realize the profound effects that Antarctica has on our environment and way of life. Antarctica may hold the key to understanding food chains, and the role of plankton in those chains. ...read more.

Locked up in its 4 km thick ice sheet is a record of past climate for the last 500,000 years. Trapped bubbles in the ice hold an archive of atmospheric gases, and evidence for levels of global pollution by industry, agriculture and atomic bombs is frozen into the ice. Equally important is the evidence for ozone depletion in the upper atmosphere. Studies on the ice sheet and its contribution to world sea level rise are vital to our understanding of global change. The ice sheet of Antarctica determines the level of the sea around the whole world including the United Kingdom. 90% of the world's water is frozen there. If it should ever melt everything above 65 metres above sea level would just be gone. ...read more.

Another reason why Antarctica is important is because the seas in the southern Ocean is rich with marine life some of which are fished commercially such as Krill and Patagonian Tooth fish, as well as the Japanese do is to catch up to 600 Minke whales a year for scientific purposes which are then sold on to shops as whale meat for people to buy. Tourism is also of a bit of importance to us, as many mainly travel by cruise ship to the Antarctic Peninsula, Ross Sea and the sub-Antarctic islands. In 1983, the Chileans began flights to King George Island, where an 80-bed hotel has been built. Main attractions are the wildlife, skiing, and visits to scientific stations and historic huts. The growth of tourism has disrupted scientific programmers and official regulation of tourism is now essential. ...read more.

A good review of why Antarctica is important however there is scope to explore these ideas in greater depth.