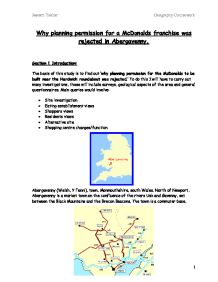 Why planning permission for a McDonalds franchise was rejected in Abergavenny.

Why planning permission for a McDonalds franchise was rejected in Abergavenny. Section 1 Introduction: The basis of this study is to find out 'why planning permission for the McDonalds to be built near the Hardwich roundabout was rejected.' To do this I will have to carry out many investigations, these will include surveys, geological aspects of the area and general questionnaires. Main queries would involve: * Site investigation * Eating establishment views * Shoppers views * Residents views * Alternative site * Shopping centre changes/function Abergavenny (Welsh, Y Fenni), town, Monmouthshire, south Wales. North of Newport, Abergavenny is a market town on the confluence of the rivers Usk and Gavenny, set between the Black Mountains and the Brecon Beacons. The town is a commuter base, service centre, and holiday resort, known locally as the "Gateway to Wales". Local industries include printing, bookbinding and light engineering. The population of Abergavenny being 9390 people, it consists mainly of single men/woman, couples and large families. The high street offers an extensive range of restaurants and snack bars, from fish and chips to expensive restaurants. Abergavenny invites many people to its market, which takes place on Tuesday; this attracts shoppers from all over Monmouth. Abergavenny has a wide range of shopping facilities from big names such as Woolworth's to small supermarkets like Cooltrader; this also creates as the center of shopping to smaller commuter villages. Aims and Objectives and risk assessment: To answer the question of why the McDonalds was not built, we need to split up the workload so it is easier to handle, to do this we think of the reasons: * Where was the proposed site? * When was this proposed? * Who rejected the proposal? * Why they rejected the proposal? * What are the pro's and con's of the proposal? Once we have answered the questions we must move onto other questions, * Where the surroundings harmful? ...read more.

LIKE IT YES THEY WOULD LIKE ONE DIXONS M 30- BAD ATTRACTS DIRTY CHILDREN AND TROUBLE MAKERS YES DEFINITELY NO SKIRRED SPORT M 40+ GOOD INKEEPING WITH THE AREA YES THEY WOULD LIKE ONE IMPACT COFFEE+ CARDS F 25 GOOD THE AREA NEEDS ONE YES THEY WOULD LIKE ONE TESCO F 25+ GOOD MODERNISATION OF THE TOWN NO NO COOLTRADER M 25+ GOOD SOMETHING NEW IS NEEDED YES NO For the shopper's questionnaire: Person Acknowledgment of petition Opposed or welcome Distance travelled (MILE) Method of transport 1 YES WELCOMED 12 Car 2 NO WELCOMED 10 Car 3 NO WELCOMED 2 Bus 4 NO WELCOMED 500 metres Walked 5 NO OPPOSED 5 Car 6 YES WELCOMED 0.5 Walked 7 A LITTLE OPPOSED 0.5 Walked 8 YES OPPOSED 5 Car 9 NO WELCOMED 10 Car 10 NO WELCOMED 1 Bus From these two tables it is clearly visible that it was mainly shopkeepers that were informed about the proposal of the McDonalds. Again it is visible that many of the shopkeepers also would have rejected the idea, there for the decision for the McDonalds to be built would have been bias. The business' in the town that are eating establishments may have found that it would have been a threat to them leading onto more marketing competition and this could lead onto a fall in customers. The only way to get customers back is by dropping prices of products; therefore, the profit will decrease. Companies then would have to be careful not to fall below the threshold limit. Also, although not written in the tables, the people that opposed to the idea of McDonalds from the shoppers point of view were rather elderly. From this I conclude to say the elderly people would rather have the town stay small and simple, but the younger generation would prefer for the town to grow and the McDonalds would be a good way to start modernizing. ...read more.

Overall I think that the raw data that I have collected is reliable and well balanced. But in the future I would have liked to conduct more work with Secondary data. The primary data was good for ascertaining information of which I was almost certain. If I were able to carry out the very same project again I would change a few things. * Allow more time for fieldwork * More Secondary data * I would have liked to talk to the Monmouthshire council and the planners who rejected McDonalds. * Work in large teams where data can be collaborated better. * Carry out more work on the transport system around Abergavenny and how this effect people passing into the main CBD. From my work at Abergavenny I would say that the small market town has strong cultural features and aspects of a controlled society. The town's older people are reluctant to give up old traditions. If Abergavenny wants to become a 'city' rather than a 'market town', one big change that will have to be made is a larger population, also a big multinational company such as McDonalds will have to be introduced to the area. Appendix: Pictures 1) This shows Greggs which could be a competitor with the McDonalds and also a multinational bank HSBC. 2) Site of the Car Park, which was meant to be used by McDonalds. Notice the housing estate in the background 3) A road sign, which is closely, situated to the site of the McDonalds it shows vital road links to adjoining places. 4) This is the dual carriage way A465 where McDonalds would be placed on the left hand side. 5) This shows the type of housing found in the estate near to where the car park and bridge to the site would have been situated. Maps 1) Shows the major roads leading to the Hardwick Roundabout which is connected to the A465. 2) Shows the CBD of Abergavenny and its shops. 3) This shows another proposed site of the Mcdonalds. Jascarn Takhar Geography Coursework 1 ...read more.