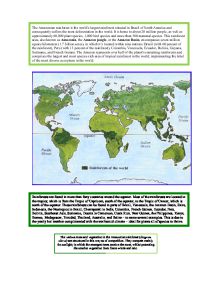 Why should Amazonia be protected?

The Amazonian rainforest is the world's largest rainforest situated in Brazil of South America and consequently suffers the most deforestation in the world. It is home to about 20 million people, as well as approximately 60,000 plant species, 1,000 bird species and more than 300 mammal species. This rainforest area, also known as Amazonia, the Amazon jungle, or the Amazon Basin, encompasses seven million square kilometers (1.7 billion acres), in which it's located within nine nations: Brazil (with 60 percent of the rainforest), Peru (with 13 percent of the rainforest), Colombia, Venezuela, Ecuador, Bolivia, Guyana, Suriname, and French Guiana. The Amazon represents over half of the planet's remaining rainforests and comprises the largest and most species-rich area of tropical rainforest in the world; implementing the label of the most diverse ecosystem in the world. Rainforests are found in more than forty countries around the equator. Most of the rainforests are located in the tropics; which is from the Tropic of Capricorn, south of the equator, to the Tropic of Cancer, which is north of the equator. These rainforests can be found in parts of Brazil, Venezuela, the Amazon Basin, Zaire, Indonesia, the Neotropics in Brazil, Cherrapunki in India, Colombia, French Guinea, Ecuador, Peru, Bolivia, Southeast Asia, Suriname, Douala in Cameroon, Costa Rica, New Guinea, the Philippines, Kenya, Borneo, Madagascar, Trinidad, Thailand, Australia, and Belize - to name several examples. This is due to the yearly hot weather complimented with the wet humid climate - ideal for plants all of species to thrive. Summary; The Amazon River Basin is home to the largest rainforest on Earth. The basin, roughly the size of the forty-eight contiguous United States, covers some 40% of the South American continent. It is only renowned as one of the wettest place on earth which inhibits over 50% of all the plants and animals in the world. Opposed from other numerous environmental conditions as well as past human influence; Amazonia is made up of a variety of ecosystems and vegetation types including rainforests, seasonal forests, deciduous forests, flooded forests, and savannas. ...read more.

Mining tin ore is considered an easier trade to retrieve from its original state in Amazonia, compared to efforts in other mines across the world. The rainforest's earth does not consist of a hard rocky substance; thorough decades of weathering and scorching hot heat blasting the ground, the tin ore can be removed easily with a hose propelling water at a high pressure. The tradesmen extracting these substances have a realtively simple job afterwards - forgening through the rubble to find the ore in which they sell to wealthy businessmen and companies, usually from other countries. Mines eventually become bare of their natural resources, so no more tin ore can be obtained - they are regarded as useless and therefore abandoned. These mines don't contain any soil nutrients as they have been washed away, so vegetation doesn't grow back once again. Other mines are then setup in different areas. As 'mining' for tin ore is a realtively simple process with high profits, especially compared to other local jobs like farming etc, more Brazilians are changing their occupation, so areas of the rainforest are being destroyed to be replaced with mines/quarrys. The rainforest aslo contains hgih traces and amounts of gold ore, which has a far higher value than tin. However, the gold mining exploration at this present time is realtively small so the amount of abandoned mines is close to none. Locals; Tribes/indigenous people - There are still a lot of tribes that still remained 'untouched' in the Amazonian rainforest, continuing to do so up until the present day. The 'Yanomami' tribe is renowned as the up most largest and dominate tribe. Choosing to live in isolation, a distance figure from the rest of the world, many tribes are still undiscovered. Each tribe is marginally different from their culture to traditions but they all survive from living with the forest, a dominant but humble part of the ecosystem; living alongside nature without threatening any serious harm. ...read more.

Showing just how important the rainforest is, even over 20 years ago. Environmentalists - Environmentalists are organizations that are involved in issues relating to the protection of the natural world, in which they are against the harmful effects of industrialized societies. In this particular incident, it is that those who are against the developed civilizations that produce waste gases. What is global warming?; The ozone layer, full of greenhouse gases, acts as a protective layer from the sun's rays. It allows light and some heat into the Earth's atmosphere which is enough to warm the entire globe. But some heat bounces back against the ground, attempting to escape back into the atmosphere, which it would normally be able to do. But with more greenhouse gases to absorb the heat inside the Earth's global temperature increases. The effects of global warming; Carbon dioxide, a gas that vegetation (trees basically) respire and produce energy with their leaves from photosynthesis, causes 9-26% of the greenhouse gas effect which is notably the second highest of all the gases. Behind that of water vapour with 36-70% which cannot be controlled or altered by human activity, unlike the atmospheric concentrations of carbon dioxide which can be increased. This is why the amounts of carbon dioxide and the other greenhouse gases must be restricted to a minimum. As otherwise the heat of the Earth's atmosphere will lead to the melting of the ice caps; leading to global flooding. Moreover, without preserving the trees of Amazonia, and all over the world in fact, the amount of carbon dioxide in atmosphere will also lead to the heating of the Earth, causing the same devastating effect. Achieving the right balance of the amount of greenhouse gases in the atmosphere can only be altered by human activity. Consequently environmentalists try to address the public about the growing concerns of global warming, pressure governments to decrease the amount of CO2 their countries produce and investigate how to prevent the ice caps from melting. ...read more.