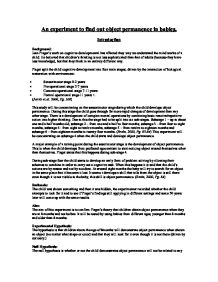 An experiment to find out object permanence in babies.

An experiment to find out object permanence in babies. Introduction Background: Jean Piaget's work on cognitive developmental has affected they way we understand the mind works of a child. He believed that children's thinking is not less sophisticated than that of adults (because they have less knowledge), but that they think in an entirely different way. Piaget split the child cognitive development into four main stages; driven by the interaction of biological maturation with environment: * Sensorimotor stage 0-2 years * Pre-operational stage 2-7 years * Concrete operational stage 7-11 years * Formal operational stage 11 years +. (Jarvis et.al. 2000, Pg. 108) This study will be concentrating on the sensorimotor stage during which the child develops object permanence. During this stage the child goes through far more rapid changes of development than any other stage. There is a development of complex mental operations by combining basic reactive/repetitive action into higher thinking. Due to this the stage had to be split into six sub-stages. Substage 1 - up to about one and a half months old, substage 2 - from one and a half to four months, substage 3 - from four to eight months, substage 4 - from eight to twelve months, substage 5 - from twelve to eighteen months and substage 6 - from eighteen months to twenty-four months. (Brain, 2000, Pg. 83-84) This experiment will be concentrating on substage 4 when the child starts and develops object permanence. ...read more.

I had an assistant with me to record observations in the same way and then at the end of the observation we conclude each other's idea to come up with the final result. I did this because the observation would be less bias and more effective, with some inter rater reliability Control: In order to make the observation fair and valid we had to control the extraneous variables. When observing the child with my assistant the child's mother will be the only other one with us. This will be done to make the child as comfortable as possible while minimising distractions. The mother did not talk or to give any hints to where the ball is. My assistant and I would not talk during the observation. It will be done in a quiet room, with no main distractions. All appliances will be turned off. E.g. Phones, TV, Radio etc. This is about as controlled and the same time as comfortable you can make the observation for both the participant and the recorder. I got full support for the participant's parents during the observation and we made sure that the child was comfortable which it was, so at the end of the observation there would be no ethical issues to evaluate. Results Participant A B C D Gender Female Male Female Male Age in months 6 10 14 16 Eye movement - towards the screen after the ball is hidden YES YES YES YES Movement to the screen - ...read more.

My experiment was done in a different culture to what Piaget's experiment conducted, which suggests cultural differences doesn't effect the results, just as Piaget's claims that the experiment is universally correct. Generalisation of study: This experiment has several factors that make is had to generalise. Firstly due to the small sample of only four children it is hard to generalise. However my results seem to support Piaget's idea that the results are universal because the sample I have used are not similar to Piaget's children from Geneva because my participants are all from Arabia origin. Due to the fact that I have used an opportunity sample, I know the children personally which may have effected the results due to experimenter bias. However when dealing with children that young experimenter bias is quite unavoidable because the child would have to feel comfortable (presence of mother) and would have to be kept interested by playing with the ball with the mother before hand. Application of the study to everyday life: The experiment applies to everyday life in things like childcare, where the caretakers would have to know the child's limits on what it can do and achieve. Anything you expect the child to use or play with will need to be visible to them at all times. Word Count: (2,423) Reference * Brain, C. (2000) AS Psychology Approaches and Methods. Nelson Thornes. * Jarvis, M., Russell, J., Flanagan, C. & Dolan, L. (2000) Angels on Psychology. Nelson Thornes Abstract ...read more.