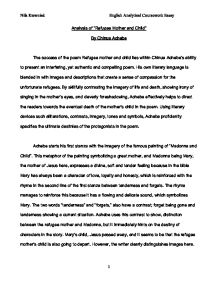 Analysis of "Refugee Mother and Child" By Chinua Achebe The success of the poem Refugee mother and child lies within Chinua Achebe's ability to present an interfering, yet authentic and compelling poem. His own literary language is blended in with images and descriptions that create a sense of compassion for the unfortunate refugees. By skillfully contrasting the imagery of life and death, showing irony of singing in the mother's eyes, and cleverly foreshadowing, Achebe effectively helps to direct the readers towards the eventual death of the mother's child in the poem. Using literary devices such alliterations, contrasts, imagery, tones and symbols, Achebe proficiently specifies the ultimate destinies of the protagonists in the poem. Achebe starts his first stanza with the imagery of the famous painting of "Madonna and Child". This metaphor of the painting symbolizing a great mother, and Madonna being Mary, the mother of Jesus here, expresses a divine, soft and tender feeling because in the bible Mary has always been a character of love, loyalty and honesty, which is reinforced with the rhyme in the second line of the first stanza between tenderness and forgets. The rhyme manages to reinforce this because it has a flowing and delicate sound, which symbolizes Mary. The two words "tenderness" and "forgets," also have a contrast; forget being gone and tenderness showing a current situation. Achebe uses this contrast to show, distinction between the refugee mother and Madonna, but it immediately hints on the destiny of characters in the story. ...read more.

This gives a horrific imagery of the refugee camp and the ill-fated misery that refugees have to experience there. The starvation that the refugees undergo is expressed well by using 'B' alliteration in the 5th line of the second stanza; "...steps behind blown empty bellies." This quote emphasizes on the under-nourishment of the children, as they are fighting diseases and a lack of food. Starving children, who are also suffering from illness, get round stomachs, and the 'B' sound here shows harsh reality to the life and suffering at this moment in the refugee's life. When reading this line, the 3 'B's are expressed in a tough way, right after each other, in contrast to if that line were to state "steps at the rear of puffed empty stomachs'. The 'B's have a sharp and bold sound to it, which is a skillful way to express the poor state of suffering refugees and the lack of food they have. As we read on, we the quote "Most mothers there had long ceased to care but not this one; she held..." This quote shows the contrast of this refugee mother and other mothers who might live in countries where this suffering is not currently taking place. The semi-colon emphasizes this contrast because it joins the two ideas of the refugee mother compared with other mothers who are more fortunate. ...read more.

The flowers are used to show the mother's final gesture of farewell, illustrating a sad and intense imagery as unfortunately this child had to die before her mother actually has, which is not the right thing in life, showing how the child's life was inopportune, but for the mother, it definitely wasn't a waste. Therefore this quote also demonstrates the attachment between the mother and child, and how the last gesture of combing her child's hair, was like saying goodbye to him. Chinua Achebe is an excellent writer, and has made this poem an intruding, yet plausible read. This poem is an example of one of his great works, which uses many different techniques such as irony to show the emotions the refugee mother has to undergo, foreshadowing to gain the attention of the readers and look at the seriousness of such an event; the contrasting image of life and death, and the contrast between more fortunate mothers and the one mentioned in the poem, which therefore show lives and emotions a refugee embarks on, as well as alliteration to highlight the harsh reality of a refugee's life. Skilfully balanced and combined in the poem with intense imagery and descriptions, this poem is an excellent example of Achebe's poem writing at its best. The tone in the poem is very depressing and painful as it shows the pain of losing a loved one, and the sorrows that war causes. Thus, the poem teaches us about the blessed relationship between a mother and her child. ?? ?? ?? ?? Nils Kwarciak English Analytical Coursework Essay 1 ...read more.