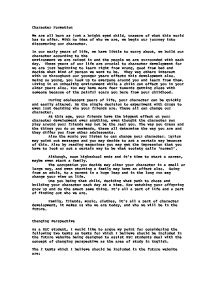 Character Formation We are all born as just a bright eyed child, unaware of what this world has to offer. With no idea of who we are, we begin our journey into discovering our character. In our early years of life, we have little to worry about, we build our character according to the environment we are raised in and the people we are surrounded with each day. These years of our life are crucial to character development for we are just beginning to learn right from wrong, good from bad and decide what kind of person we want to be. They way others interact with us throughout our younger years effects this development also. Being so young, you look up to everyone around you and learn from them. Living in an unhealthy environment while a child can effect you in your older years also. You may have more fear towards getting close with someone because of the painful scars you bare from your childhood. During adolescent years of life, your character can be quickly and easily altered. By the single decision to experiment with drugs to even just deciding who your friends are. These all can change our character. At this age, your friends have the biggest effect on your character development over anything, even thought the character you play around your friends may not be the real you. ...read more.

An example of this is in The Conciliation painting, where the handshake symbolises the welcoming of the Europeans by the Aborigines, while in the National Picture, the handshake symbolises the acceptance of the Aboriginal People by the Europeans. Techniques used to portray Changing Perspective within the two texts are: o The Superimposement of Truganini's face. Truganini's face has been fused with detail from the artist Byzantine's painting of Jesus Christ. Jesus was crucified, and so was Truganini in a way. She was the last Tasmanian Aborigine, who died from genocide. Truganini faced the fear of being killed because of who she was. o The incorporation of the 20th century icons such as the esky, the surveyors levels and the stereo in the National Picture Painting portray the change in the Australian way of life. o Changing Perspective is exposed by the noticeable increase of the European inhabitants from the Conciliation painting to the National Picture and the decrease of the Aboriginal population. This suggests the British over taking the Aborigines rite to their land. o The background drop in the National Picture is a man made one, compared to the natural background incorporated into the Conciliation painting. This suggests that in recent years, Australia has become more of a man made environment. This may include the demolishing of trees to produce buildings. sky high Sky High represents many comparisons of changes, from paragraph one to two and again from paragraph five to six. ...read more.

When describing the rest of the backyard she it literal, but when she returns to the washing line it becomes poetic language again. This is because she is making great comparison of her two eras, childhood and adulthood. A small pilot light burning somewhere inside indicates the image of a pilot light which makes us think that her desire to climb on the line has never died and could burst out any minute. But the effect is that we realise that the potential for action may not be realised in adulthood. There are too many things tying me to the ground, this last line refers to the speaker's physical weight as stopping her from climbing, but they also refer metaphorically to the responsibilities and restrictions that tie her to the ground. These lines express the speaker's sadness at how our perspective inevitably changes as we get older and become aware of the 'realities' of life. This leads to a view of the world that is from a practical perspective, rather than a carefree or imaginative perspective. In the first paragraph the washing line is the "best climbing tree in the yard". In the last paragraph it is described as a "more age-warped washing line" with "sagging wires" and "spotted metallic arms' a different view of how it was seen first - the washing line has changed and so has the writers view of it, reflecting the influence of time and change in self. ...read more.