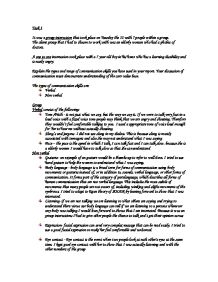 Task 1 It was a group interaction that took place on Tuesday the 12 with 7 people within a group. The client group that I had to chosen to work with was an elderly woman who had a phobia of doctors. A one to one interaction took place with a 7 year old boy in his home who has a learning disability and is easily angry. Explain the types and range of communication skills you have used in your report. Your discussion of communication must demonstrate understanding of the care value base. The types of communication skills are: * Verbal * Non verbal Group Verbal consist of the following: * Tone /Pitch - it not just what we say, but the way we say it. If we were to talk very fast in a loud voice with a fixed voice tone people may think that we are angry and shouting. Therefore they wouldn't feel comfortable talking to you. I used a appropriate tone of voice loud enough for her to hear me without actually shouting * Slang's and jargons- I did not use slang in my dialect. This is because slang is mostly associated with teenagers and also she may not understand what I was saying * Pace - the pace is the speed in which I talk. I can talk fast and I can talk slow. because she is a elderly women I would have to talk slow so that she can understand Non verbal * Gestures- an example of an gesture would be a thumbs up to refer to well done. I tried to use hand gesture to help the women to understand what I was saying. * Body language - body language is a broad term for forms of communication using body movements or gestures instead of, or in addition to, sounds, verbal language, or other forms of communication. It forms part of the category of paralanguage, which describes all forms of human communication that are not verbal language. ...read more.

The sender has the responsibility for the message. The sender's message travels to the receiver through one or more channels chosen by the sender. The channels may be verbal or non-verbal. They may involve only one of the senses, hearing for example. Non-verbal communication, popularly referred to as body language, relies primarily on Seeing rather than hearing. Care value base In each of the two interaction the issues with care value base are the same on now ground did I discriminate with any of the clients, I did not use any swear words and I talk to them with respect and I respect their opinions of life and the decision that they make I promoted their diversity TASK TWO The communication skills that I have used are * Tone./pitch * Slang's and jargons * Pace * Gestures * Body language * Listening * Facial expression * Eye contact. Group interactions My tone and pitch was appropriated I did not shout at my client as this would make her angry or even intimidating to talk to me so I kept it at a level that she could hear me clearly. I did not used any slang's and jargon because my client may not of understand what I was say so she will be confused not only just my clients but others within the group also the only time it is appropriate for me to use slang is when I am talking with my friends. I used appropriate pace I did not talk to fast because people may not of heard clearly what I was saying. In order to get my point across I talk slowly and clearly to that my point could be heard. Gestures- I used appropriate gestures for the other to understand what I was trying to say. Adapted the used of Egan theory of SOLER which stands for Squarely, Open, Lean, Eye contact, Relaxed. ...read more.

I talked appropriately - I did not shout, I used the right tone, pitch and pace , I took into considerations the client group that I was talking to. 3. I used hand gestures - so that people can understand the message Weakness 1. according to my evidence sheet my communications skills where good but if I was to talk to group containing more than 20 people I probably would be nervous One on one Strength 1- Used the correct tone, pitch and pace in order for the child to hear clearly what I was saying Weakness None noted Action plan In order to improve my communication skills I will do the following - practice using different types of communication skills when I am talking to people - practice with different clients groups - getting feedback Some theorist as Kolb and lewin have tried to explain the step involved in evaluating personal practice. Kurt Lewin was a German-born psychologist, became one of the pioneers of social psychology. Kurt lewin suggested that that practical learning might involved a four stage process * Planning - imagination and working out what needs to be done * acting, -doing trying something out * observing -taking notes * and reflecting - using information to think something through David A. Kolb (b. 1939) is an American educational theorist whose interests and publications focus on experiential learningKolb theory put forth a slight different four stage explanation of learning from own experiences. The stages are * experience- * reflection or thinking about the experience * using theory to explain what happen * testing out new ides in practice if I was to used both Kolb and lewin theory it would help me improve my communications skills because I would have experience and confidence in myself this is because I would have practice using my communication skills in different situation and have obtained feedback as lewin have stated. With that feedback I would have seen what need to be change therefore bringing me back to stage one of the theory ?? ?? ?? ?? ...read more.