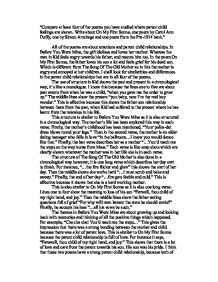 &quot;Compare at least four of the poems you have studied where parent child feelings are shown. Write about On My First Sonne, one poem by Carol Ann Duffy, one by Simon Armitage and one poem from the Pre-1914 bank.&quot;

"Compare at least four of the poems you have studied where parent child feelings are shown. Write about On My First Sonne, one poem by Carol Ann Duffy, one by Simon Armitage and one poem from the Pre-1914 bank." All of the poems are about emotions and parent child relationships. In Before You Were Mine, the girl idolises and loves her mother. Whereas the man in Kid feels angry towards his father, and resents him too. In the poem On My First Sonne, the father loves his son a lot and feels grief for his dead son. Which is different from The Song Of The Old Mother as in this the mother is angry and annoyed at her children. I shall look for similarities and differences in the parent child relationships that are in all four of the poems. The use of structure in Kid shows the past and present in a chronological way, it's like a monologue. I know this because the lines one to five are about past events from when he was a child, "when you gave me the order to grow up." The middle lines show the present "you baby, now I'm the real boy wonder." This is effective because this shows the father son relationship between them from the past, when Kid had suffered to the present where he has learnt from the mistakes in his life. ...read more.

This shows the role of the parent and her duty to do all the housework "...I must scrub and bake and sweep." This suggests that the mother works really hard. The mother feels annoyed with her children because whilst she does the housework her children's worst worry is about which ribbon to have matching with their hats in their dreams. This gives the impression that the mother has got a totally different lifestyle compared to her children. The themes in Before You Were Mine also involve parent child relationships however it differs to Kid, as there is love in the relationship in Before You Were Mine. This poem is about looking back with memories and growing up. In On My First Sonne the themes are similar as both relationships are full of love. The themes in Kid are that the death of his son because he wants to know about life as he asks questions. The parent child relationship is full of love because the parent expresses his feeling through words which make you feel. For example, "Farwell, thou child of my right hand and joy," this shows he loved his son dearly. The rhythm of The Song Of The Old Mother, On My first Sonne and Kid have rhyming couplets, however in Before You Were Mine it doesn't. ...read more.

This poem is sad because the mother works from morning till night doing all the work whilst her children dream. The parent child relationship isn't strong this is because they don't interact with one another, and the children don't bother to help their mother. On my first Sonne is about love and affection towards his son. In the end, the parent learns and says that he will never get too attached to anything he loves ever again. I think this is a sad poem because the parent loved his son so much he was his pride, his joy. His son meant everything to him and because of his son's death; he's never going to love anything like this again. This makes me think that you should make the most of what you've got in life and hold onto it because you don't know what's round the corner. This is similar to Before You Were Mine because in both parent child relationships feelings are shown. The feelings which are shown are love and care for one another. Before You Were Mine is about a girl who is looking at a photo, she is reflecting back all the positive memories of her mother. She idolises and loves her mother a lot. This poem is full of such joyful memories which make you think, you should always love your family no matter what. ?? ?? ?? ?? ...read more.